Home>News>Uneasy Gambians wait as ECOWAS heads meet with Jammeh, #Barrow
By AT editor - 14 December 2016 at 1:50 am 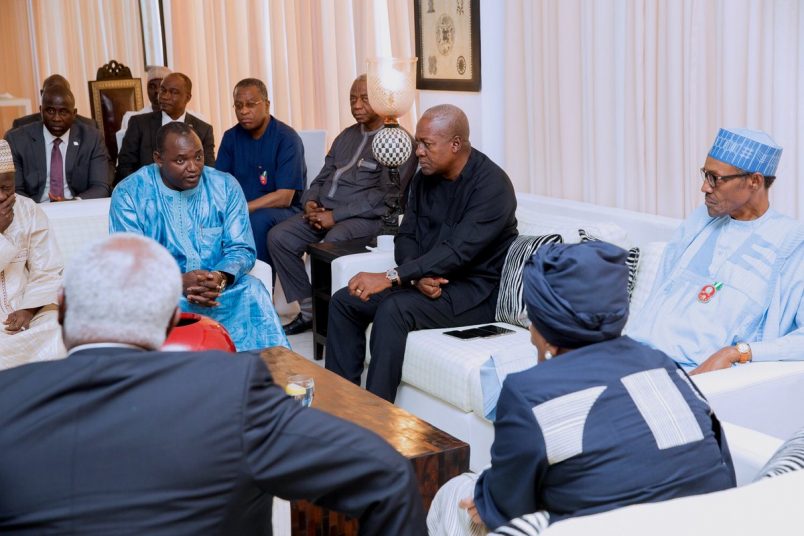 In The Gambia, the political crisis caused by President Yahya Jammeh’s refusal to accept results of the December 1 elections continued Tuesday, but none of the day’s developments appeared to bring the West African nation any closer to a resolution.

A delegation of regional heads of state, including Nigerian President Muhammadu Buhari and Liberian President Ellen Johnson Sirleaf, spent the day in negotiations with Jammeh but have as yet been unable to convince him to step aside.

“We come to help Gambians find their way through a transition,” Sirleaf, head of the ECOWAS team, told reporters. “That’s not something that can happen in one day.”

Buhari said Jammeh was receptive to the delegation, whose trip to Banjul also included outgoing Ghanaian President John Mahama and Sierra Leone’s Ernest Bai Koroma . Yet Jammeh pressed ahead with a Supreme Court petition that would set aside the certified election results that gave opposition candidate Adama Barrow a clear victory with 43.3 percent of the vote.

Jammeh, head of the Alliance for Patriotic Reorientation and Construction (APRC) party, initially conceded the loss but days later announced on state television that they were null and void.

He is demanding new elections, although the head of The Gambia’s electoral commission, Alieu Momarr Njai, does not support Jammeh’s plan and has expressed concern for his own safety. Armed soldiers took over the electoral commission headquarters as the heads of state arrived for negotiations.

The delegation also met with Barrow and opposition party leaders following their talks with Jammeh.

The African Union, the United Nations Security Council, the European Union and United States are among the international voices calling on Jammeh to honor the will of the Gambian people in electing Barrow, and facilitate a smooth transition.