Home>News>Report: Delegates killed as Somalia struggles to meet election deadlines
By AT editor - 14 December 2016 at 3:51 am 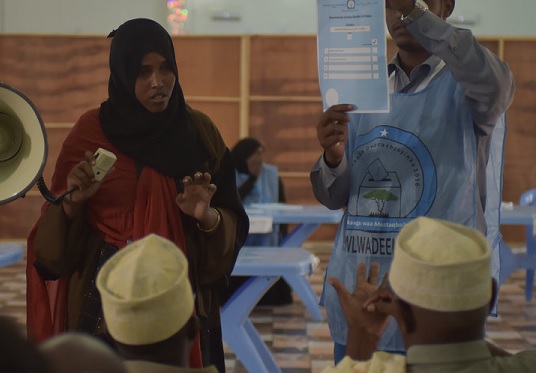 Two electoral delegates have been executed in Somalia, the latest in a string of attacks related to the country’s troubled elections. Radio Shabelle reported Tuesday that the two delegates were killed by Al Shabaab militants as they returned from a lower house polling place in Adado, in the central region of Galmudug.

The deaths of the delegates have put residents on edge as violent episodes continue to mar the evolving and complicated electoral process. The attacks come as Somalia seeks to wrap up its parliamentary voting, with the most recent deadline, set previously for today, moved to December 22.

Because the system in Somalia cannot yet support independent voting by each citizen, community delegates are selected by traditional clan elders. Those delegates, placed into electoral college groupings, then vote to determine the 275 MPs destined to sit in the Lower House. These lower-house representatives will then be joined by 54 senators in the Upper House of the parliament.

The process has seen frequent and frustrating delays, despite its well-deserved optimism. After a general election set for August was postponed, the Upper House voting was meant to be completed by October 10, with the lower-house delegate voting done by November 10.

Since both houses of parliament need to be seated to choose a president, the November 30 target date for the presidential election has changed several times.

The National Leadership Forum, which includes incumbent President Hassan Sheikh Mohamud, has set a new date of December 28 for the presidential election.

In the interim, electoral violence and charges of corruption have plagued the process amid Somalia’s deteriorating security situation – including Sunday’s car bomb attack in Mogadishu, which left at least 29 people dead. The electoral process has been tainted with complaints of bribery, intimidation and fraud.

This past weekend, a candidate won in HirShabelle who was explicitly banned after his role in electoral violence last month left delegates injured at a Jowhar polling place. The United Nations, African Union and other bodies said they were “gravely concerned” about that incident in a statement released Sunday.