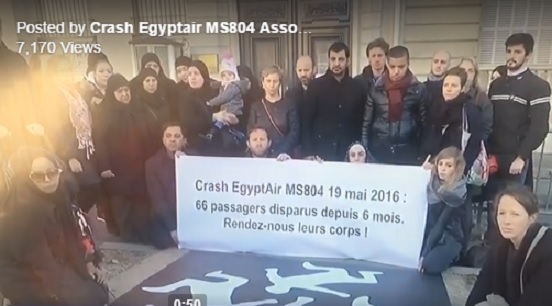 Egypt will launch a criminal investigation into the crash of EgyptAir Flight 804, the Ministry of Civil Aviation announced Thursday. The decision follows the discovery of explosive materials on the bodies of victims of the May 19 incident that plunged the airplane into the Mediterranean Sea.

“The Central Directorate of Aircraft Accident Investigation received reports from the Forensic Medicine Authority indicating traces of explosive materials found in some of the remains of the victims’ bodies,” the ministry stated. The findings were referred to the General Prosecutor, the statement said.

There were 66 people who died on the early morning flight from Paris to Cairo. The plane disappeared from radar over the waters between Crete and the Egyptian coast at about 2:45 a.m. Investigators initially found debris north of Alexandria after the plane disappeared without recording a distress call, and subsequently discovered confirmation of a fire through black box recordings and instrument data.

In September, Le Figaro reported that a team from France’s Criminal Research Institute of the National Gendarmerie (IRCGN) found traces of TNT on the debris of the Airbus 320, which had 15 French passengers on board, as well as 40 Egyptians along with travelers from other nations.

The account said that Egyptian authorities prevented a more thorough examination, causing tensions between the two countries. The incident also has frustrated the families of French victims, who have launched a petition appealing to President François Hollande and other authorities for closure. The online campaign asks for the release of bodies that have been held in Egypt since Flight 804 went down.