Home>News>Egyptian photographer detained for using child in fake Aleppo images
By AT editor - 21 December 2016 at 1:16 am 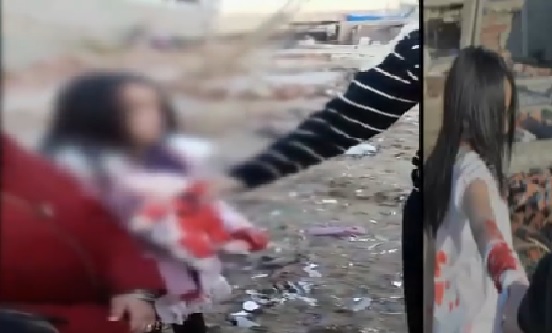 Egyptian authorities said Tuesday that they had arrested five people in connection with a troubling photo shoot involving a child, which they planned to pass off on social media as images from the Aleppo crisis in Syria.

Security officials near the Suez Canal discovered the Port Said residents, who were shooting the low-quality images against the backdrop of a ruined home.

Two children, including the 12-year-old girl who appears in the images, also were found. The girl was wearing a white dress smeared with fake blood and holding a similarly doctored-up teddy bear.

A 21-year-old photographer was taken to jail for four days, and four other adults ranging in age from 25 to 44 were taken into custody and released. Police confiscated a camera and six mobile phones found with them.

A video of the shoot posted by the Egyptian Ministry of the Interior with details of the arrest had more than 200,000 views by early Wednesday.

The video and images drew hundreds of responses, many from people outraged by the hoax –  but also some who called for support for the children of Aleppo and other conflict zones, and felt the images were more an expression of solidarity with them.

Heartbreaking images of children from Syria have resonated with the global community, including those of 5-year-old Omran sitting injured in an Aleppo ambulance earlier this year, and 3-year-old Alan Kurdi, discovered on a beach in Turkey in 2015.

More recently, children ostensibly live-tweeting from Aleppo have seen widespread attention as their fate hangs in the balance of ongoing evacuations. The authenticity is frequently questioned or considered propaganda, and the Egyptian incident serves as a reminder when relying on social media news and images.