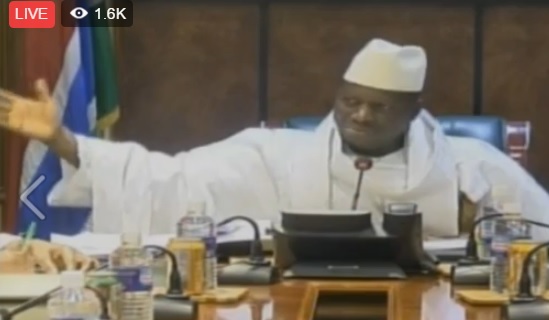 Gambian President Yahya Jammeh, in a rambling conversation on state television late Tuesday, explained his reversal on the December 1 election results that gave the victory to opposition coalition candidate Adama Barrow, blaming a range of electoral procedure factors while dismissing attempts by other leaders to mediate the process.

Jammeh made clear his refusal to accept the intervention of an ECOWAS team sent last week to help defuse the situation and convince Jammeh, the sole leader of the nation since 1994, to step down immediately.

During the course of his televised remarks, delivered with applauding Gambian barristers on hand at his right and left, Jammeh made clear what the answer is. “I will not step down,” he said, promising to defend himself and his country and insisting that he was ready to die if necessary.

Barrow won the election with 43.3 percent of the vote. Jammeh initially accepted the results, but changed his mind a week later and insisted on new elections. He reiterated his complaint that not all registered voters went to the polls, and those weren’t always open, while appearing incredulous that his history of winning elections had ended in a fair and democratic manner.

“Justice must be done,” Jammeh said. “The only way justice can be done is to reorganize elections.”

The efforts of foreign governments, NGOs — at one point, the International Criminal Court — are a disrespectful violation of the internal affairs of the state, he said. Those hoping to ensure Jammeh’s cooperation in a peaceful transition to the new administration are a challenge to The Gambia’s authority, he added.

Still speaking after midnight, Jammeh said their comments about Gambia and decisions for Gambia are unacceptable, and won’t influence his decision to demand new elections as well as new oversight of those elections.

The head of The Gambia’s electoral commission, Alieu Momarr Njai, has said he does not support Jammeh’s plan and has expressed concern for his own safety. Armed soldiers took over the electoral commission headquarters as the heads of state arrived for negotiations last week, raising alarm among international leaders.

This is a developing story, so please return to Africa Times for updates.