Home>News>Gambian diplomat Faye 'absolutely' concerned for his safety, his nation
By AT editor - 27 December 2016 at 6:16 am 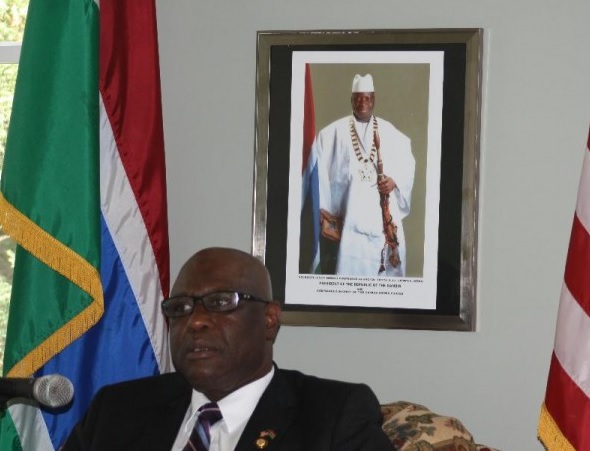 The Gambia’s ambassador to the United States said Monday that he is concerned for his safety if he returns to the country, but won’t be deterred from insisting that embattled President Yahya Jammeh step down.

“I cannot tell you, I wish I knew,” said Sheikh Omar Faye when asked what he expected to happen, during a National Public Radio program interview in the U.S. “But I am a Gambian, I feel that I am part of the country and I want the rule of law and human rights to be respected.”

Faye confirmed last week that Jammeh had called him back to Banjul.

He explained that his foreign-service position offers a 90-day window for decision making, and he is watching to see what will happen on the ground. Yet when asked if he feared for his safety, given Jammeh’s history of human rights violations when dealing with political opponents, he was direct.

“Absolutely,” Faye said. “Absolutely. There’s no questions about that, because of the history and the reputation of the system.”

Faye is one of 11 ambassadors representing The Gambia overseas who have called on Jammeh to step down, and he has written an open letter calling on the dictator, who has been in power since 1994, to engage in a peaceful transition in keeping with the will of the Gambian people.

“We believe there are a few people behind the scenes trying to push the president not to accept this,” Faye said, noting that Jammeh initially praised the integrity of the voting process. He did not offer names, but said these people were influencing Jammeh “for their own selfish interests” and putting The Gambia in harm’s way.

That risk isn’t limited to internal conflict, as Faye stressed that any ECOWAS commitment to use military force to remove Jammeh would harm The Gambia as well as the region.

To listen to the complete All Things Considered interview, see the link.