Home>News>Concerns over election process cast shadow on #Somalia swearing-in ceremony
By AT editor - 28 December 2016 at 3:21 am 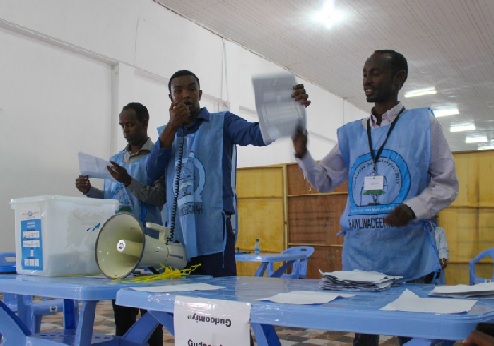 Somalia moved forward with its arduous elections process on Tuesday, swearing in nearly 300 new lawmakers even as the international community said it was “gravely concerned” about changes by the National Leadership Forum that would add seats, and other election issues.

Today’s inauguration of the Federal Parliament represents a step forward in the electoral process,” the United Nations said in a joint statement that also included the African Union, European Union, Inter-Governmental Authority on Development (IGAD), Belgium, Italy, the Netherlands, Sweden, the United Kingdom and the United States.

“However, international partners wish to see the electoral process go forward with the existing 54 seats in the Upper House as stipulated under Somalia’s Provisional Constitution. Any further expansion of the Upper House should only be contemplated after the presidential vote has been held in the new federal parliament and implemented through a proper constitutional process.”

Somalia’s elections have seen frequent delays – the presidential election most recently set for today will now be held in January – and repeated allegation of bribery, fraud, intimidation and violence. The swearing-in ceremony was held despite the fact that not all voting is complete, and some candidates have been banned.

“The NLF’s decision to revoke all disqualifications of candidates made by the country’s electoral bodies for allegedly committing abuses and malpractices represents a blanket amnesty for some of the most blatant irregularities witnessed during this electoral process,” the joint statement read. “It also contravenes the Federal Government’s solemn commitment to respect the rule of law.”

The UN and other signatories are calling for new elections for seats “where the voting outcomes were clearly distorted by violence, corruption, intimidation, the unauthorized substitution of electoral college delegates and a failure to set aside one of every three seats for exclusively female candidates.”

The statement urges completion of the entire election process ahead of a UN Security Council meeting on Somalia on January 19.