Home>News>#Harmattan winds arrive, bringing Saharan dust and travel delays to West Africa
By AT editor - 28 December 2016 at 5:20 am 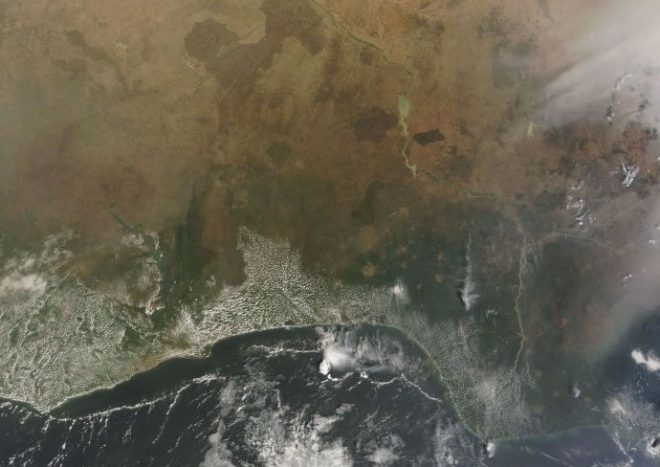 Local media reports said the poor visibility caused by harmattan haze has left airline terminals packed with passengers, some of them sleeping with nowhere else to go. Flight cancellations affected travel between Lagos and Abuja, Port Harcourt and other cities. International flights including Arik Air, Ethiopian Airlines and Qatar Airways also were affected.

Sam Adurogboye, a spokesman for the Nigerian Civil Aviation Authority, confirmed that poor visibility caused by the dust had impacted flights.

“The weather has been poor,” Adurogboye told The Nation. “Once it is below the approved weather minima for each airport, it is no go at all.”

The dry, dusty Saharan winds known as harmattan are common from December to March in the region, affecting Nigeria, Ghana or Cote d’Ivoire to the south and blowing desert dust west into the Cape Verde Islands. The dense dust clouds are visible from space in this NASA satellite image.

European forecasts suggest strong winds will continue lifting the dust toward Cape Verde for the next few days. There are reports of harmattan-related flight cancellations on the islands as well.

The Ghana Meteorological Agency said it expects a mild harmattan season this year, when compared with last year’s transportation and other disruptions during a severe season. People are asked to be mindful of health problems like dust-triggered asthma, and the higher fire risks associated with the dry winds.