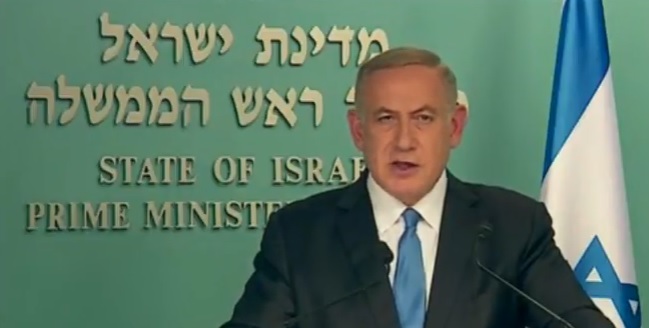 “What he did was spend most of his speech blaming Israel,” said Netanyahu in a televised speech that charged Kerry with being as imbalanced in his remarks as the UNSC resolution and process itself.

The 14-0 vote at the UNSC, with the United States abstaining, upheld the recognition of the 1967 borders, and reiterated that Israeli settlements in Palestinian territory are an illegal barrier to a two-state solution and any meaningful peace process between Israel and Palestinian leaders.

Israel immediately limited its diplomatic relations with Senegal, one of the co-sponsors of the resolution, and promised to cut off aid to the West African nation. Israel subsequently announced Monday it was limiting diplomatic ties with Egypt and Angola, among the other nations that voted for the resolution.

In his speech, however, Netanyahu was unequivocal in holding the U.S. responsible for initiating last week’s resolution, and called on the U.S. to “stop this game of charades” while asserting Israel’s security will remain his priority as the new American administration takes leadership.

“Israelis do not need to be lectured about the importance of peace by foreign leaders,” Netanyahu said, charging Kerry with paying lip service to terrorism in his support for policy solutions that compromise Israeli security.

Kerry, in a speech that outlined six points including historical barriers to the Israeli-Palestinian peace process – the emphasis on Israeli settlement policy among them – denied that the United States was responsible for the resolution.

“The United States did not draft or originate this resolution, nor did we put it forward,” Kerry said, reiterating the will of the international community and the longstanding view that Israel’s settlements compromise the possibility of a Palestinian state and the future of peace and prosperity in the region.