Home>News>Gambia's #Jammeh calls ECOWAS stance a 'declaration of war' in New Year address
By AT editor - 1 January 2017 at 4:16 am 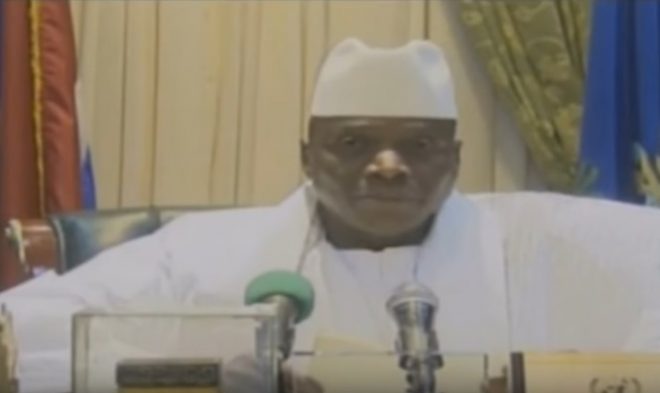 Outgoing Gambian President Yahya Jammeh delivered a New Year’s Eve message that accuses the West African nations of ECOWAS of issuing “a declaration of war” against him and his country, in their insistence that Jammeh must honor the December 1 election results and be removed from office.

In his video address, Jammeh said that ECOWAS efforts to remove him by any means necessary, including the threat of military force, will be met with fierce resistance from The Gambia.

“Let me make it very clear that we are ready to defend this country against any aggression and there will be no compromise for that,” Jammeh said. “Defending our sovereignty and total independence is a sacred duty of all patriotic Gambians.”

Jammeh’s address began and ended with New Year greetings, but served as “an occasion to strengthen our commitment” to justice and unity, which he said is threatened by attempts to intervene in Gambian affairs.

“It is in effect a declaration of war and an insult to our constitution,” Jammeh said of the ECOWAS stance. “It is therefore absolutely unacceptable.”

The ECOWAS states have disqualified themselves as mediators and negotiators because they are no longer impartial, he added.

Jammeh reiterated that his refusal to accept elections results that gave opposition coalition candidate Adama Barrow the victory is based on “unjustifiable and unprecedented anomalies in the elections” that must be corrected by a return to the polls so that Gambians can “elect who they want to be their president in free and fair elections.”

During a similar speech 10 days ago, Jammeh made clear his refusal to accept ECOWAS intervention aimed at defusing the situation and convincing Jammeh, the sole leader of the nation since 1994, to step down immediately.