Home>Commentary>#Burundi: Violence begins a new year with more questions than answers
By Laureen Fagan - 2 January 2017 at 6:52 am 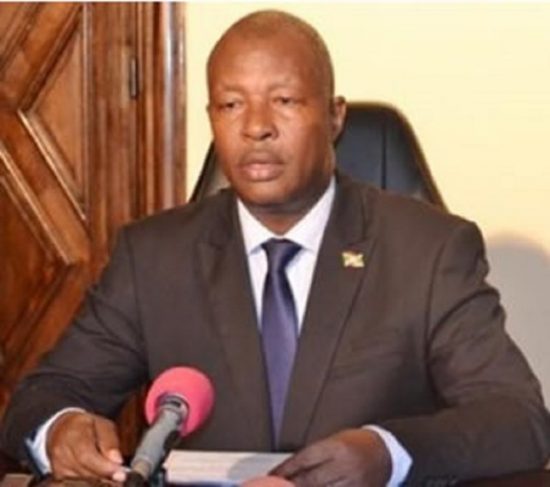 Just minutes into the new year, Burundi began 2017 with the same shattered peace it has known too often in the nearly two years since President Pierre Nkurunziza announced he was seeking a third term.

Emmanuel Niyonkuru, the Minister of Environment in Burundi, died in Bujumbura in what police officials and Nkurunziza himself have called an assassination as Niyonkuru returned home on New Year’s Eve. Arrests have been made in connection with the death, Burundi National Police spokesman Pierre Nkurikiye said. The predictable outpouring of condolences came next in an all-too-familiar tragic script.

What’s less clear is why Niyonkuru was targeted and what his death may mean in the deeply troubled East African nation. Some international analysts and observers warn that Burundi is precariously balanced at the edge of genocide, again – and at the very least, riven by violence that has now claimed the first sitting minister assassinated during his tenure under Nkurunziza’s regime.

Some Burundi human rights activists speculated that Niyonkuru had opposed land takeovers by high-ranking government officials. Others immediately noted that the 54-year-old minister, responsible for water and environment as well as land and urban planning, has an ethnic Tutsi background in a climate in which Burundi’s foundational power balance between Hutu and Tutsi has shown cracks since 2015.

“Whatever the motive of this assassination, it is an extension of the Burundian chaos engendered by the third illegal presidential term of Mr. Pierre Nkurunziza,” said CNARED, the main political opposition coalition, in a translated statement Sunday night. “The CNARED considers (Nkurunziza) the first person responsible for this assassination as well as those of more than 3,000 people since April 2015.”

Burundi’s political violence: One death among so many

The 2015 date marks Nkurunziza’s announcement to seek a third term in office in violation of the two-term limit set by the Burundi constitution, despite the defeat of a draft law to amend it the previous year.  His decision sparked weeks of violent protests and a failed coup that have been met with extreme security measures to crush all dissent, with political opposition leaders, journalists and activists as key targets. Just days ago, an emboldened Nkurunziza said he is considering a fourth term re-election bid in 2020.

Estimates of the death toll in Burundi vary widely, though, and have been difficult for the international community to assess in part because of Burundi’s lack of cooperation with the United Nations, NGOs and other stakeholders. Burundi claims its sovereignty is violated by the presence of investigators, who have been removed from the country, or by international police and peacekeeping efforts. The same rationale applies to the International Criminal Court, which Burundi ministers voted in October to leave.

“No one can quantify exactly all the violations that have taken place and that continue to take place in a situation as closed and repressive as Burundi during the period covered by UNIIB’s mandate,” said the United Nations Independent Investigation in Burundi team.

The September UNIIB report detailed evidence of “hundreds of cases of summary executions, targeted assassinations, arbitrary detention, torture and sexual violence,” committed by the Government of Burundi or those complicit with it.

The UN High Commission on Refugees verified 564 executions through August, the report said, noting that “this is clearly a conservative estimate.” It also noted almost 400,000 refugees and internally displaced people, many in neighboring Tanzania, Uganda, Democratic Republic of Congo and Rwanda, despite ties with the latter that have deteriorated since 2013 and Burundi’s accusations of interference.

Is ethnicity fueling the political violence?

More troubling still, in a country whose recent history includes Tutsi-Hutu violence with consequences comparable to that of Rwanda’s, was a November 8 directive for all Burundi public employees to disclose their ethnicity. It served as a red flag to those concerned about the deteriorating situation.

“Such a survey, given Burundi’s history of virulent ethnic conflict, could spread fear and further mistrust among the population, and could be hugely dangerous if misused,” said Anathestasia Crickley, the chair of The UN Committee on the Elimination of Racial Discrimination (CERD) in late November.

The potential for genocide – some might argue the reality – is controversial and hotly contested. NGO leaders and human rights groups agree on the severity of human rights violations, but some also see the dark impulse of ethnicity as a driver. While the violence has been seen as politically motivated, and the targets are people who oppose Nkurunziza and have demonstrated against him, a recent FIDH report asks: Is this a political or an ethnic conflict? The conclusion is that ethnicity is “sufficiently being instrumentalized for the current situation in Burundi to be called a repression with genocidal dynamics.”

Denouncing ethnic Tutsis as enemies of the regime – particularly in light of Hutu suffering during the former civil war – is rhetoric “used by members of the defense and security forces, the SNR, the Imbonerakure and the ruling party, all of whom support President Nkurunziza’s project,” FIDH said.

Rene Lemarchand, an academic in the United States, agrees that ethnicity is becoming more noticeable as a policy issue. “A growing number of Tutsi elements have been excluded from key government positions,” he wrote in a December piece for The Conversation.

“Perhaps even more ominous is the outrageous language used by the president of the Senate, Reverien Ndikuriyo,” he adds. “Some of his utterances have been reminiscent of the coded euphemisms employed during the Rwanda genocide as synonyms for killing Tutsi.”

Yet Lemarchand makes clear that the conflict is political, not purely Hutu-Tutsi ethnic conflict, and centers on Nkurunziza’s 2015 decision. Its evolution has imperiled the Ashura shared-power peace agreement that protected both ethnic groups, and has thrown Burundi into this new catastrophe.

Niyonkuru’s death, one now of so many, is still under investigation, but it may reflect a continuum more than it marks a turning point in Burundi’s crisis. Willy Nyamitwe, a media spokesman for Nkurunziza who denies genocide in Burundi, survived an assassination attempt just weeks ago. Last year saw an alarming number of targeted attacks on high-level officials – and this new year now has begun in their shadow. If a turning point is possible, it’s a return to meaningful negotiations that lead to an outcome of peace before it’s too late.