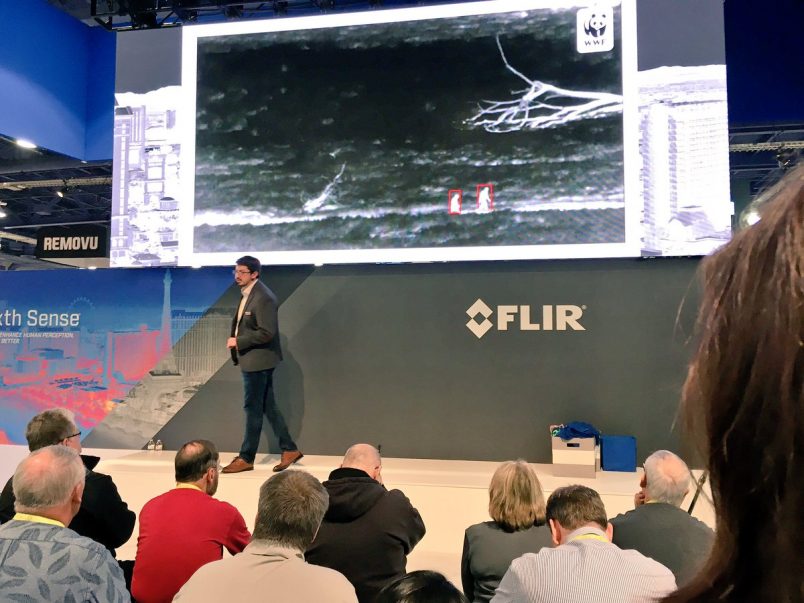 The World Wildlife Fund (WWF) has been working on how technology can end wildlife crime – and at this year’s Consumer Electronics Show (CES) they’re showing guests how thermal imaging is helping to protect elephants and other African animals.

Visitors to CES 2017 in Las Vegas had the chance Thursday to see how FLIR® thermal imaging products are used in the WWF’s Wildlife Crime Technology Project, supported by a $5 million grant from Google.

FLIR’s Eric Becker offered insights into how both the heat of animals and humans can be “seen” in game preserves in Africa, by putting thermal imaging technology tools in the hands of law enforcement.

The program’s thermal cameras, along with drones, digital tracking systems and other solutions, are currently deployed at sites in Namibia, Kenya, South Africa, Malawi and Zimbabwe.

Namibia has played a key role in the project, because its Ministry of Environment and Tourism agreed in 2012 to collaborate with WWF to test and deploy wildlife protection technologies. In June 2015, after earlier tests that included drone surveillance for rhinos and elephants – and live videostreaming of waterholes – the WWF field tested the prototype FLIR® thermal imaging cameras in Namibia.

The systems are designed to identify humans and send automatic alerts to rangers. Since March, the thermal cameras have been used by Kenya Wildlife Service and the Mara Conservancy to help catch dozens of poachers.

The CES 2017 display also shows off other eco-friendly uses for the technology, including beekeeping. A livestream link of FLIR® presentations at the show is available here.