Home>News>Buhari, ECOWAS team prepare for next meeting with The Gambia's Jammeh
By AT editor - 10 January 2017 at 6:10 am 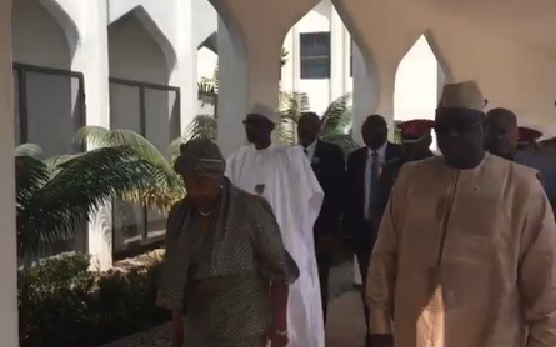 Nigerian President Muhammadu Buhari will lead a delegation of regional heads of state planning, for the second time in a month, to meet with President Yahya Jammeh in Banjul.

The ECOWAS leaders originally planned to meet with Jammeh on Wednesday in another attempt to negotiate a peaceful transition of power, following Jammeh’s refusal to honor the December 1 presidential election victory of opposition coalition candidate Adama Barrow. That meeting has been rescheduled for Friday.

Nigeria’s Foreign Affairs Minister, Geofrey Onyeama, told reporters that the team’s meeting on Monday focused on concern for the “deteriorating situation that has been reported in respect of security,” as well as the media crackdown, arrests and now a mass exodus of refugees fleeing to border countries.

The same ECOWAS team met with Jammeh on December 13, when Buhari said Jammeh was receptive to their mediation. In one of several broadcast addresses to Gambians, however, Jammeh publicly defied them, and subsequently warned during his New Year’s Ever address that ECOWAS intervention was an attack on Gambian sovereignty and “in effect a declaration of war.”

Jammeh, head of the Alliance for Patriotic Reorientation and Construction (APRC) party, initially conceded the loss but days later announced on state television that they were null and void. He is demanding new elections.

The African Union (AU) has said it supports ECOWAS authority in decisions on The Gambia. The AU also is joined by the United Nations Security Council, the European Union and United States in calling on Jammeh to honor the will of the Gambian people in electing Barrow, and facilitate a smooth transition.

The original post has been updated to reflect the meeting date change.