Home>News>Shaking wakes Madagascar as 5.5-magnitude earthquake hits central highlands
By AT editor - 12 January 2017 at 2:22 am 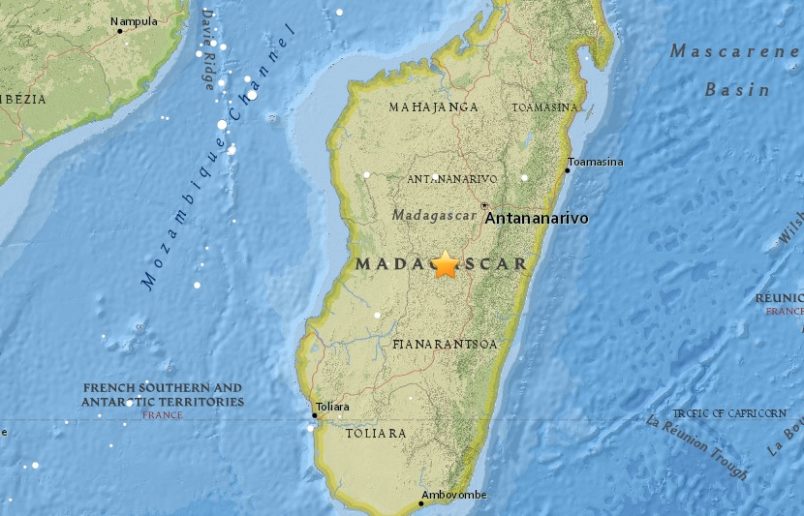 People on the Indian Ocean island of Madagascar were shaken by a moderate earthquake early Thursday morning, but there were no immediate reports of injuries or significant damage.

The United States Geological Service measured the quake at a magnitude 5.5 on the Richter scale. It said it was centered south of the lakeside town of Betafo, in central Madagascar, just a few miles from the border between Antananarivo and Fianarantsoa provinces.

The quake occurred just after 1 a.m. local time, and was felt in Antananarivo, Antsirabe and the Atsimo-Andrefana region. Witnesses described fairly strong shaking that felt like a long time, with some estimates that the earthquake lasted about 15 to 20 seconds in duration.

In Antsirabe, a hotel guest described a cracked ceiling and broken pipes that sent water into the room, but no serious damage. Guests went outside into the parking lot until it seemed safe to go back inside.

Others affected said they were awakened from their sleep, with houses shaking and rattling furniture. Some described things falling off the walls, and the paintings hung on them turned crooked and awry.

The economic and social development site Vatofototra said the quake also was felt across a wide area, including Analamanga region and northwest to Tsiroanimandidy.

Earthquakes are infrequent but not uncommon in Madagascar, which sits off the southeastern coast of the African continent and atop the Somali Plate tectonic zone.