Home>African Future>South African scientists find Agulhas 'cyclone' swirling in the ocean
By AT editor - 15 January 2017 at 8:24 am 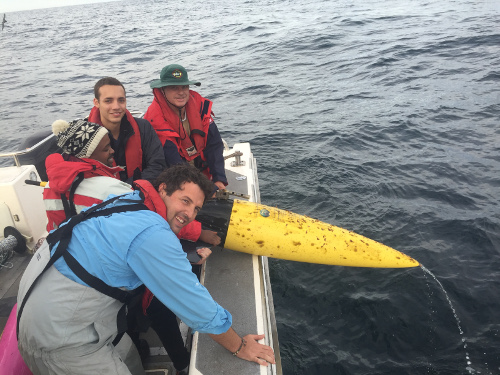 Scientists who study the Agulhas Current – one of the fastest ocean flows in the world off the coast of South Africa – say they have accidentally discovered a giant swirling whirlpool by using remotely controlled underwater vehicles.

Their findings may offer insight into marine life ecosystems, climate change and cooling, or even how rogue waves that threaten mariners, long associated with the Agulhas, might be better navigated.

A team working on a joint project with Council for Scientific and Industrial Research (CSIR) and South African Environmental Observation Network (SAEON) launched two SeaGliders in waters off of Port Elizabeth during experiments in 2015. Their task was to gather data on how the ocean current interacts with the coastal sea shelf, by collecting information about temperature, salinity, pressure, oxygen, light and other conditions.

Their findings, published January 14 in the online Geophysical Research Letters, included an ocean cyclone about 15 kilometers in diameter. “The submesoscale cyclones are often associated with warm water plumes, which extend from their western edge and exhibit strong northeastward currents,” the scientists explain.

The Agulhas Current plays a key role in transferring heat into the Atlantic Ocean, and connecting to the current “conveyor belts” that moderate global ocean temperatures and their influence on climate.

In a study published in Nature in November, other researchers reported that the Agulhas is becoming wider rather than stronger, in part because of increased turbulence related to wind and eddying.

Still other research looks at the current’s speed, as scientists continue to seek a better understanding of how these changes affect climate and warming.