Home>News>Cameroon bans Anglophone opposition groups; leaders arrested
By AT editor - 18 January 2017 at 12:58 am 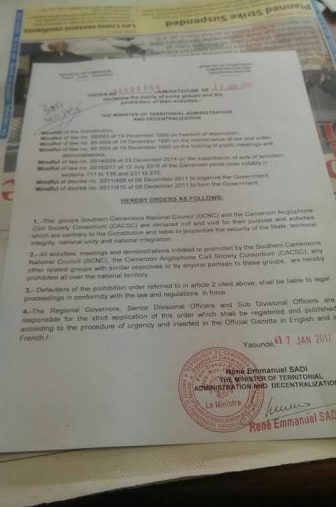 In Cameroon, two leaders of a top Anglophone community organizing group were arrested Tuesday as the news of their detention sparked a new round of protests in Buea. The move came on the second day of this week’s general “ghost town” strike to call attention to Anglophone concerns in Buea, Bamenda and other cities.

Barrister Nkongho Felix Agbor-Balla, the president of the  Anglophone Civil Society Consortium, and Dr. Fontem Neba, the group’s secretary general, were arrested on the same day that the Cameroon government deemed two groups and their activities illegal in a letter made available to local media.

“All activities, meetings and demonstrations initiated or promoted by the Southern Cameroons National Council (SCNC), the Cameroon Anglophone Civil Society Consortium (CACSC), any other related groups with similar objectives or by anyone partisan to these groups, are hereby prohibited all over the national territory,” the letter said.

A statement issued by the Cameroon Common Law Lawyers Association – one of the professional groups, including teachers and doctors, who have called for social and cultural reforms in the courts and classrooms – condemned the arrests.

“Their phones have been seized and they are being subjected to inhumane treatment,” the statement said, calling on supporters to gather at the police station and demand their release while blocking the roads to Yaounde to ensure they are not transported there.

Local journalists report that Internet access is shut down in Buea amid increasing tensions in the street.

Violent protests and arrests have occurred for months, as Anglophone activists have pressed for reforms in the French-speaking nation. What began as protests evolved into boycotts; doctors and health professionals joined the strike on Monday.

The cultural rift goes beyond language to encompass the political, economic and social inequalities Anglophones say they experience under President Paul Biya, who has been in power for more than three decades.

In Cameroon, those tensions have at times led to regional calls for secession. The consortium is again calling for a two-state federation, and asking people to “peacefully resist the sadistic military regime which has continued unabated for half a century.”

The consortium and its affiliated or aligned groups also demand the release of Cameroonian youth who have been detained since the new round of protests began in October.