Home>News>President Barrow of The Gambia takes oath at embassy in Dakar
By AT editor - 19 January 2017 at 7:48 pm 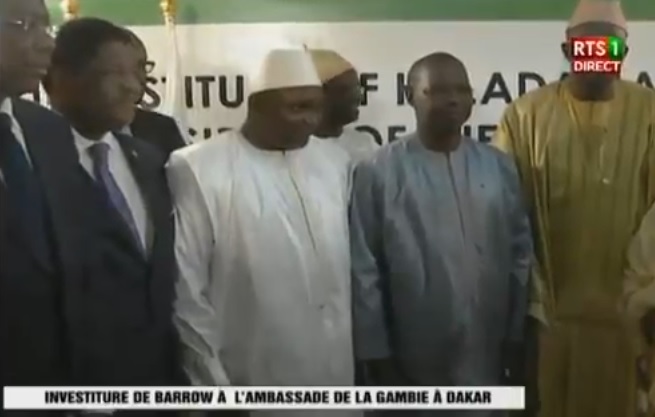 President Adama Barrow has been sworn in as the new leader of The Gambia, after taking his oath of office at the Gambian embassy in neighboring Senegal.

Barrow’s inauguration was attended by African heads of state and diplomats gathered in Dakar, where the new president had remained this week for security reasons as outgoing President Yahya Jammeh refused to step down despite crumbling support at home and international condemnation abroad.

Jammeh’s efforts to maintain is grip on The Gambia meant that a ceremony initially planned at a public stadium in Banjul was deferred in favor of Thursday’s event in Dakar.

The crowds came nonetheless, and gathered outside as Barrow officially succeeded Jammeh, whose 22-year rule of the West African was marked by the dictator’s caprice and cruelty. Cheering erupted in the neighboring streets once the swearing-in became official.

Barrow called on all high-level Gambian authorities to immediately align their loyalties with the new administration. At least four of Jammeh’s ministers resigned this week, among numerous government officials and diplomats who have called on him to accept the results of the December 1 election that put Barrow in power.

Among those leaders is General Ousman Badjie, the Gambian military chief who said Wednesday that he will not engage his troops in “a stupid fight” with African troops prepared to remove Jammeh by force.

Troops from Senegal, Nigeria and Ghana have prepared at the Gambian border, with support from the regional ECOWAS authority approved by the African Union.

Jammeh on Tuesday declared a 90-day state of emergency he said was because of “unprecedented and extraordinary amount of foreign interference” in Gambian affairs, and concerns for peace and safety.