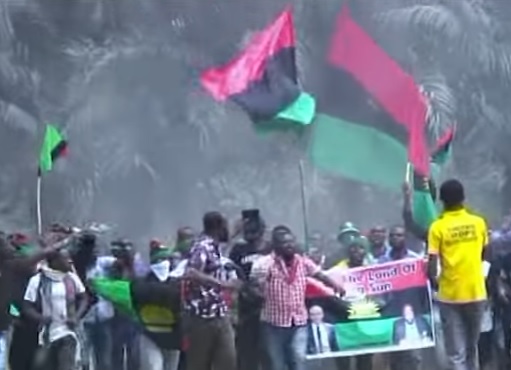 A rally organized by Biafran activists to celebrate the Friday inauguration of United States President Donald Trump spun into violence in the city of Port Harcourt, local media and activists report.

The rally, planned by the Indigenous People of Biafra (IPOB) separatists, attracted large crowds of pro-Trump supporters waving both American and their own rising-sun flags to the industrial city in Nigeria’s southeast.

The details about precisely what happened remain in dispute, but the Biafran marchers were met by Nigerian military forces who prevented their travel into the main part of the city. Witnesses say they used live fire and teargas on the crowds, with reported death tolls ranging from one person to a total of 20. The authorities, however, have denied using lethal force in interviews with journalists.

“To the best of my knowledge, there was no casualty as the police merely employed minimal action, which involved the use of tear gas to disperse protesters,” a regional police spokesman told Naij.com.

A different police spokesman told The Nation that one person was killed, and three others who were critically wounded with gunshots to the head were not expected to survive. The IPOB said there were a total of 11 people killed and others injured, while others have put the number even higher.

There were also dozens of arrests, the IPOB said.

The renewed Biafra movement has seen numerous episodes of violence since October 2015, when separatists seeking an independent state were further sparked by the arrest of movement leader Nnamdi Kanu. An Amnesty International report released in November found at least 150 Biafran activists had been killed thus far, with evidence of human rights violations and political repression.