Home>African Future>Electing a new AU chair: Connecting with citizens, rising to the challenge
By Laureen Fagan - 22 January 2017 at 8:31 pm 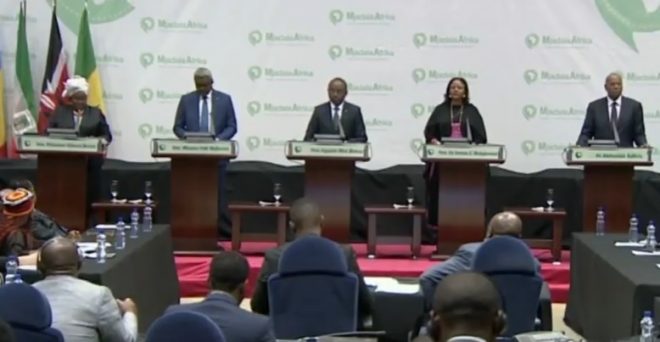 The African Union will meet next week in Addis Ababa for the 28th AU Summit, and the five candidates vying to replace Dr. Nkosazana Dlamini Zuma are heading into their final campaign lap before voting begins.

Dlamini Zuma, who plans a presidential run in South Africa, announced almost a year ago that she would not seek re-election but she has continued in the position since July when the AU failed to choose a new commission chairperson during their summit meeting in Rwanda.

At the time, Botswana Foreign Minister Pelomoni Venson Moitoi was the frontrunner and she did garner the most votes of any candidate. Yet Venson Moitoi was unable to meet the two-thirds threshold of AU member nation votes (35 are needed) so the decision was necessarily postponed until the upcoming January summit.

At this critical juncture in the evolution of the AU, it’s surprising that the vote – just days from now – hasn’t received more attention. The five candidates met in Addis Ababa on December 9 for a debate that was televised across the continent, one in which Venson Moitoi performed quite well, providing comprehensive responses that demonstrated a big-picture ability to see issues from transportation infrastructure to post-conflict reconciliation in their complexity rather than as discrete challenges.

Alongside her, though, were the four other candidates including Kenyan foreign minister Amina Mohamed, whose resume is impressive but whose performance in the debate was lackluster. She faces homegrown opposition in Kenya rooted in Mohamed’s track record on protecting Kenyan citizens from human rights violations, as well as allegations of corruption and excessive spending heard in Nairobi.

Mohamed also opposes the authority of the International Criminal Court (ICC), which has embittered Kenyan leaders who watched President Uhuru Kenyatta grapple with his own cases. Kenyatta, speaking at an Independence Day celebration in December, warned again of Kenya’s ability to leave the ICC too.

“Our experience at the ICC demonstrated a glaring lack of impartiality in this institution,” he said. “We have started to see many more nations openly recognizing that the ICC is not impartial,” added Kenyatta, referring to recent announcements by South Africa, Burundi and The Gambia to quit the ICC.

Conversely, Venson Moitoi and Botswana have reiterated support for ICC membership, but it’s worth noting that outspoken President Ian Khama is by no means universally loved by AU members, who have seen the AU mission in the crosshairs of Khama’s critique more than once.

While the controversial issue of ICC authority has long been on the AU agenda, it is now top of mind and may prove a sticking point in Venson Moitoi’s bid.

Mohamed presents a strong challenge to Venson Moitoi, particularly among East African nations who have pledged their support, and even among a few Southern African Development Community (SADC) member states such as Tanzania and potentially South Africa. Tanzania also is a member of the East African Community (EAC) and has promised to align its vote with Uganda, Burundi and other members, but Tanzania also is known to break away from EAC priorities – as in the case of the European Union Economic Partnership Agreement, which is on hold as President John Magufuli refuses his signature.

The remaining candidates and the need for AU connection

While the SADC favors Venson Moitoi and her experience, other regional bodies are backing their own candidates and none may prove more influential than the 15-member Economic Community of West African States (ECOWAS). One of the candidates for AU Commission chair is from ECOWAS; Abdoulaye Bathily is a United Nations Special Representative for Central Africa with a distinguished career as a Senegalese diplomat and politician.

Bathily is an elder leader rooted in a passion for African sovereignty and self-determination, and during the debate he called for deep AU reforms geared toward pan-African unity. In interviews earlier this month, he reiterated his concern that the continent relies too heavily on Europe to fund its own obligations toward peace and security.  Yet Bathily also emphasizes education, unemployment, and the creation of opportunity for African women and youth that give them alternatives to migration.

Agapito Mba Mokuy, the minister of foreign affairs from Equatorial Guinea, also emphasizes youth –  including his own. As the youngest candidate for AU chair, he brings a new vision to make the AU relevant to future generations of Africans, a passion that Bathily shares with his fellow West African.

“We talk about the youth but we don’t consult them,” says the 51-year-old diplomat from Equatorial Guinea. Yet he has had difficulty establishing a base and getting real traction for his candidacy, and also was previously passed over at last year’s Kigali summit.

The fifth candidate, Moussa Faki Mahamat of Chad, is a foreign minister who in contrast stressed his experience. “I have spent long nights in this hall and even my hair has gone white,” he joked before turning to the AU Agenda 2063, peace and security issues in South Sudan and the Democratic Republic of Congo, good governance priorities, migration – and climate, a priority of his candidacy vision.

Ultimately, the new AU Commission chair needs to lead on many critical issues, but above all the mission to connect with Africans themselves and their communities is foundational to the future success of the AU. They’ll have to meet that challenge within a rapidly evolving ecosystem of connectivity and the high expectations of citizens that come with it. To that end, their AU member nation representatives need to carefully consider how a new AU chair will best achieve that goal too.

A video of the full AU Commission Chair candidate debate is available here.