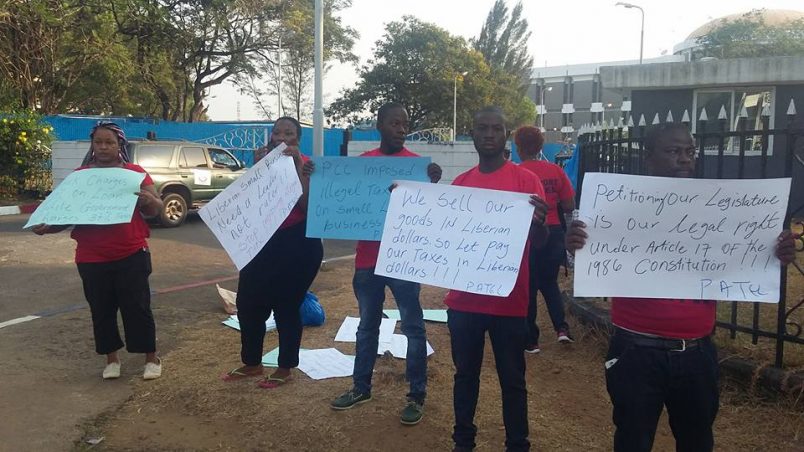 Protests over economic conditions in Liberia entered their second day on Wednesday as sign-waving marchers again converged on the capitol building in Monrovia.

The protests are part of a three-day action led by the Patriotic Entrepreneurs of Liberia (PATEL), who want to call attention to the plight of business owners who must pay taxes they say are unfairly high and unnecessary, as well as the harassment and arrest of street vendors whose goods are seized by the Liberian National Police.

“The recent tariff is affecting we the business people, and the citizens at large, and our protest is to draw the attention of our lawmakers to these things, for them to do something,” said PATEL leader Prince Howard in a UNMIL radio interview. “These things create chaos, and this is how you find young people turning into (troubled youth) and we don’t want this to happen.”

At the top of their concerns, though, is a rapidly escalating exchange rate between the United States and Liberian dollars that puts Liberian business owners at a disadvantage and, the protesters say, isn’t evenly applied or enforced.

“While the Central Bank of Liberia (CBL) publishes the daily exchange rates in several local newspapers and through its website, the published rates seem to be observed mainly by government entities and commercial banks,” Liberian reporter David Yates explains. “Very few beyond these entities observe the published rates.”

Even that is part of the problem, protesters say, because business owners pay taxes in U.S. currency but sell their produce, clothing and other goods in Liberian dollars, creating even more hardship in a difficult economy.

The Tuesday protests closed down some businesses, although participation remained uneven at various locations in and around the city. The PATEL organizers also served a petition to lawmakers outlining their concerns about the currency controls and taxation concerns.