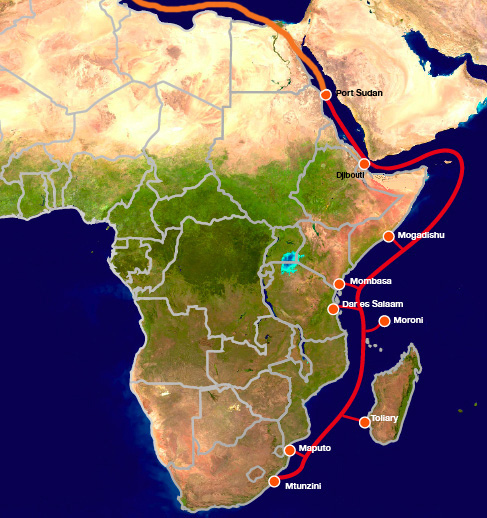 Connectivity woes continue on the island nation of Madagascar, following the breakdown of an undersea cable that serves as a primary optic fiber network.

The Telma Madagascar communications company was first alerted last Wednesday that the underwater EASSy cable that supports Internet access to the island nation was out of service. The damage, according to a company release, occurred at a depth of 2,600 meters and about 38 kilometers offshore from the southwest coastal city of Toliara.

The company is working around the clock to complete repairs, the release said, but they are being done in stages and required equipment to be shipped from Cape Town, South Africa. The arrival of those parts on their 3,000-kilometer journey was not expected before Friday, and complete cable repairs will take an estimated total of 15 days.

In the meantime, service to 3 million clients is compromised and the company is making business customers, schools and their websites a priority during work hours in an effort to mitigate the impacts on the economy of Madagascar. Other Telma clients have been encouraged to use communication alternatives, which the company acknowledges is an inconvenience until the complex repair process is complete.

The EASSy cable – short for Eastern Africa Submarine Cable System – is a 10,000 kilometer cable that runs the length of the continent’s east coast. It’s the highest capacity line serving sub-Saharan Africa, and in addition to the Madagascar site, coastal connection points also are located in Mozambique, Tanzania, Kenya, Somalia and Djibouti, as well as on Comoros.

Those points serve a network that reaches as far inland as Khartoum in Sudan or Kigali in Rwanda, among other cities.