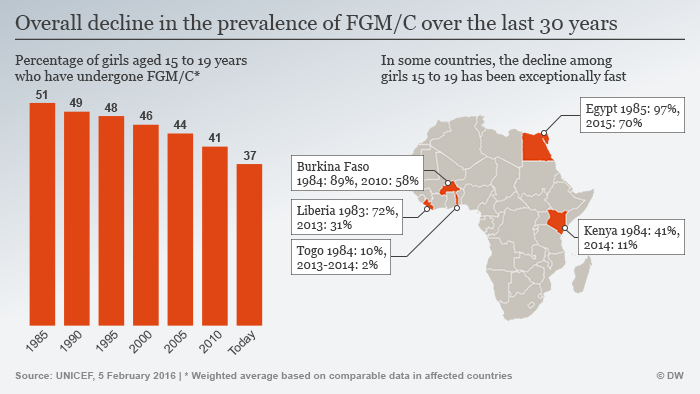 The United Nations Day of Zero Tolerance drew attention to the ongoing fight against female genital mutilation (FGM) by highlighting both its consequences and some success stories on Monday.

The 2017 theme for this International Day is: “Building a solid and interactive bridge between Africa and the world to accelerate ending FGM by 2030.”

Real progress has been made in Kenya and Liberia, as well as Burkina Faso and Egypt, but there is much more to be done. There are still 37 percent of girls ages 15-19, in nearly 30 countries globally where FGM is practiced, who undergo the cutting, according to 2016 UN Children’s Fund (UNICEF) data.

The main reason that FGM continues  is out of a desire for social acceptance and to avoid social stigma, according to a 2016 report by the Secretary-General .

The heads of UNICEF and UN Population Fund (UNFPA) called for faster action to achieve the commitment to end FGM by 2030, as part of the UN Sustainable Development Agenda.

“It means creating greater access to support services for those at risk of undergoing FGM and those who have survived it,” said UNICEF Executive Director Anthony Lake and UNFPA Executive Director Babatunde Osotimehin in a joint statement.

“It also means driving greater demand for those services, providing families and communities with information about the harm FGM causes – and the benefits to be gained by ending it,” they added.

Together, they lead the largest global program to accelerate the abandonment of FGM. The program currently focuses on 17 African countries and also supports regional and global initiatives, and is marking its tenth year.