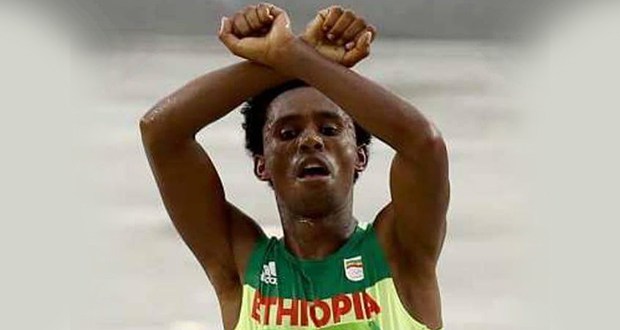 It was a Valentine’s Day to remember for Ethiopian athlete Feyisa Lilesa, who was reunited with his wife and children in the United States on Tuesday.

Feyisa, an Olympic silver medalist in Brazil whose raised-arm protest in solidarity with the Oromo people helped to bring global awareness to Ethiopian human rights issues, waited with a dozen roses in a Miami airport as the flight carrying his family arrived.

The 27-year-old athlete has not returned to Ethiopia because of concerns for his safety, and has been anxious to be reunited with his family, the Associated Press reported.

Feyisa will remain in the U.S. on a special skills visa and for now, is making his home in the southwestern border state of Arizona. Previously, he has said that he was not seeking asylum, and the Ethiopian government assured his safety last summer.

The image of Feyisa completing his 2016 marathon race with crossed arms raised above his head, despite the Olympic organization’s ban on political protest, flashed around the world and immediately positioned the Oromo runner as an international advocate for Oromia.

His many public appearances included a meeting with Merera Gudina last fall in Brussels. A widely circulated photo of the two, joined by Ethiopian opposition leader Berhanu Nega, led to the arrest and detention of Merera for allegedly violating conditions of Ethiopia’s ongoing state of emergency.

The country has remained under that state of emergency since October.