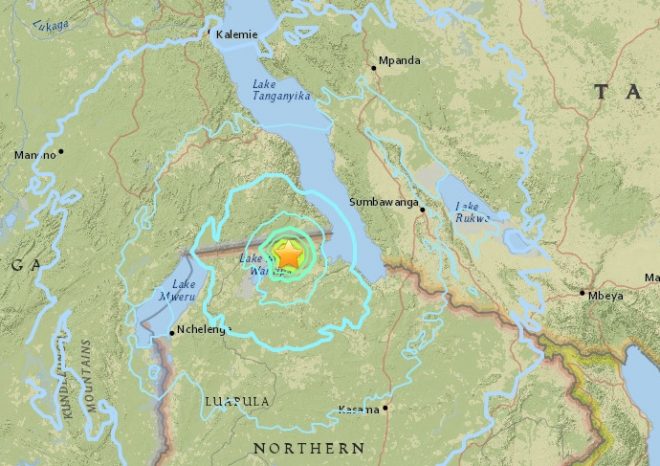 People in Zambia were shaken by a moderate earthquake Friday morning, but there were no immediate reports of injuries or significant damage.

The United States Geological Service measured the quake at a magnitude 5.9 on the Richter scale. The quake was centered 45 kilometers east of Kaputa, in the lakes region near the border with Democratic Republic of Congo. Its expected impacts also included the town of Nchelenge.

The quake occurred at about 2:30 a.m. local time, and was immediately felt to the west as well east in Tanzania.

“It woke up our children and the laying hens we keep in our yard woke up and starting crying out,” said one Kaputa resident, reporting the earthquake to the Euro-Med Seismological Center (EMSC).

“The whole house shook. We couldn’t walk straight,” the testimony said. The EMSC put the magnitude slightly lower at 5.8 than the United States service did.

Messages posted to social media said many people awakened by the strong tremors were unable to go back to sleep.

Most of the significant seismic activity on the continent is concentrated in the East African Rift Valley, and along the Mediterranean Sea coast in North African nations. Recent earthquakes have occurred in Malawi and Ethiopia, but also in Madagascar as well as Niger.

A 5.9-magnitude earthquake that struck neighboring Tanzania in September claimed at least 19 lives and caused significant damage, including the loss of at least 800 homes and businesses in the town of Bukoba.