Home>Finance & Economics>#AIDFAfrica development summit, new report focus on African finance
By AT editor - 28 February 2017 at 5:14 am 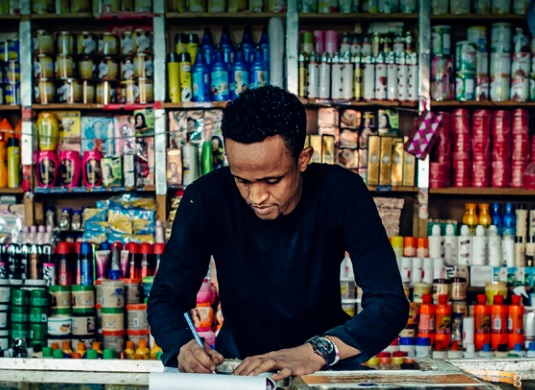 The Aid & Development Africa Summit beings Tuesday in Nairobi, with the event featuring more than 70 speakers whose expertise includes health, humanitarian aid and resilience, and finance.

Among those speakers is Ronald Rwakigumba of Mercy Corps, who serves as the Uganda country coordinator for the Agri-Fin Mobile Program, designed to support smallholder farmers with bundled agribusiness tools and products available via mobile phone. He’ll serve on a panel that looks at how mobile technology and innovation can support community resilience, including nutrition, health and economic development.

Some of the ideas Rwakigumba will offer to the 300 participants at the sold-out summit are also detailed in a February 2017 report from the global Mercy Corps organization. That report, completed in partnership with FSD Africa, the Financial Sector Deepening Africa initiative based in Nairobi, looks at challenges and strategies in some of sub-Saharan Africa’s most fragile countries when developing financial products and access.

Mobile technology is among the more promising – and of course obvious – solutions to problems as diverse as facilitating remittances for refugee populations, or improving credit access for enterpreneurs. Yet there are plenty of other tools apart from fintech to boost African development in some of the continent’s most troubled locations.

The report identifies 26 sub-Saharan nations as fragile states, determined by a range of indicators. They include the context of conflict, or widespread unemployment and gender-based inequalities, but ultimately emphasize the role of infrastructure, good governance and institutional transparency in healing that fragility. For example, financial exclusion is rated as high as 90 percent of the population in Burundi and Niger; it’s 80 percent in Cameroon, Chad, Democratic Republic of Congo, Sierra Leone and Sudan. In part, that’s because of the strong link between fragility and displacement caused by climate and conflict.

While the report is clear-eyed about the challenges posed by fragility, it recognizes that they are part of a process. “Fragility is not a category of states, but a risk inherent in the development process itself,” said Liberian President Ellen Johnson Sirleaf. It’s an orientation toward solutions that sees possibilities rather than pathologies.

Challenges in the FASA environment

To be sure, the statistics tell a story of struggle. Just 14 percent of adults in the “Fragility Affected States in Africa” (FASA) have access to a bank account, for example, and those numbers are lower among women and youth. Formal employment in the FASA nations averages around 12 percent, which means residents live in a different economic reality than traditional financial products are designed for. For many, that means community-based solutions for saving money, getting loans or starting a business.

Remittances play a significant role in countries including Nigeria, Kenya, Senegal and Sudan; all four countries see transfers in excess of USD$1 trillion each year, according to cited 2014 figures from the Overseas Development Institute. Liberia and Lesotho see rates in the 20 percent range of GDP, and improving access via technology while reducing costs for transfers confers a benefit in fragile states. What’s key, though, is that up to 25 percent of these funds aren’t needed for immediate expenses – depending on the location and context – and are often a source for startups where credit products are difficult to access.

At a more macroeconomic level, the lack of access to financial products is second only to the lack of electricity in fragile nations when it comes to barriers to business development and investment. The World Bank’s 2016 “Doing Business” report puts eight African nations in the world’s lowest ten. High costs, difficulty with economies of scale because of small markets, and complications arising from the immaturity of both the financial sector and the legal environment conspire to increase risk.

When it comes to the possibilities, the Mercy Corps-FASA report identifies seven spheres that show real promise for economic development in African communities – and offer attractive investment opportunities.

Insurance programs, like the award-winning pilot project at the International Livestock Research Institute (ILRI) in Nairobi are one strategy that’s making impact. The program uses satellite data to verify climate and grazing conditions, navigating the practical problem of sending insurance adjusters into remote or hostile regions when there’s a loss. It’s bringing to livestock herders the basic insurance that protects farmers elsewhere in the world, but it’s just one of the portfolio of products fragile states need.

“The risks facing low-income populations and businesses, and financial providers serving these segments in fragile contexts, are vast and complex, and uninsured losses can lock them into vicious debt cycles,” the report explains. Index insurance and other models support business development success.

Crowdfunding platforms drawing the support of about 30 million Africans in the diaspora are another market to explore. Examples include Movement Capital (formerly Homestrings), which has a presence in Cameroon, Cote d’Ivoire, Nigeria and Somalia, and offers investment opportunities for health, infrastructure projects, startups and more. There are similar platforms and related projects for those attracted to impact investment, which is particularly strong in Kenya and East Africa, with a smaller presence in West Africa.

Another potential growth market exists for Islamic finance, which rests on tradition as much as new technology. There is an increasing demand in 21 countries, and sub-Saharan Africa has more people excluding themselves from formal financial institutions for religious reasons than anywhere else across the globe. There’s also demand for products that align with Islamic financial principles because they’re attractive to many people who aren’t Muslim, but want to exercise ethical investment practices.

“The expansion of Islamic microfinance has the potential to offer more effective tools for improving financial inclusion than conventional finance,” the report said, specifically in some sub-Saharan African nations.

In all cases, understanding context in fragile African states is critical, as is building on the knowledge and strengths that already exist and keeping a long-term view. While the report details what quite a few international NGOs and private philanthropies are doing, it keeps its focus on creating new solutions for self-directed Africans.

To view the entire “Financing the Frontier: Inclusive Financial Sector Development in Fragility-Affected States in Africa” report, see this link.

You can learn more about the Aid & Development Africa Summit here.