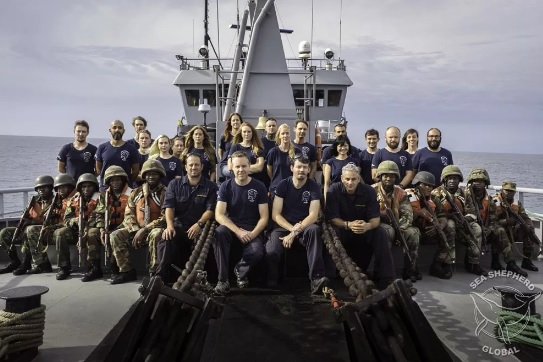 The Liberian government has partnered with an environmental group to launch a new effort at curbing illegal, unreported and unregulated (IUU) fishing – and so far, they’ve made arrests on three poaching vehicles.

The Sea Shepherd organization has been patrolling the West African waters off Liberia for almost four weeks, most of that in secrecy, and working with the Liberian Ministry of National Defense along the coastline.

“We wanted to keep the operation a secret for the first few weeks, operating under the cover of darkness so we could catch as many ships as possible by surprise,” said Campaign Leader Peter Hammarstedt.

Their first arrest came when Liberian Coast Guard members boarded a Spanish-owned trawler flagged to Senegal, discovered near the Cote d’Ivoire border. The vessel was found in violation of 26 laws and regulations, including the transshipment of 20 tons of shrimp in violation of Ivorian law. The crew on the trawler also included three undocumented workers.

That same week, the Liberian team working with Sea Shepherd boarded a Chinese trawler near the port of Monrovia. They found 22 violations, including unsafe working conditions for crew members, many of whom were from Sierra Leone, and a lack of any vessel documents. The boat also has been avoiding Liberian taxes and customs by underreporting its landings, which resulted in officials directing the Liberian Coast Guard to board every boat owned by the fishing company.

A third trawler flagged to Ghana was found near the border with Cote d’Ivoire, fishing within the exclusion zone – designed to protect Liberia’s fishing sector – without a license. The captain offered a bribe to the Liberian boarding officer, which was reported as yet another criminal violation, the group said.

The Sea Shepherd program is similar to a 2016 partnership with Gabon, in which three Congolese trawlers and a Spanish boat were detained for violations.