Home>News>Nigerian UN expert calls for stronger protection of Africans with albinism
By AT editor - 3 March 2017 at 10:28 pm 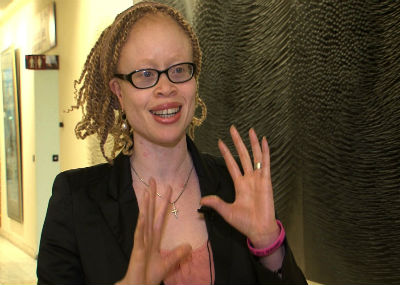 An independent United Nations expert called Friday for stronger oversight of traditional medicine in African countries, in order to limit the threat to people living with albinism.

Ikponwosa Ero, a Nigerian with albinism and internationally recognized human rights advocate, called for a two-track strategy that would address the urgent need to end attacks on light-skinned albinos and the trafficking of body parts from those with the genetically inherited condition.

Yet the recommended approach would also focus on public education aimed at dispelling myths about albinos and the associated traditional practices.

More than 600 attacks and other violations have been reported in 27 countries in recent years, although some go unreported. Albinos are targeted for the purpose of witchcraft rituals, or in medicine rituals known as muti or juju, that rely on the belief that albino body parts bring wealth, healing and good luck.

“The issue is further complicated by the lack of effective oversight over the practice of traditional healers, the secrecy that often surrounds witchcraft rituals and the absence of clear national policies on the issue,”  said Ero, who was presenting her report to the UN Human Rights Council in Geneva.

The report comes following a high-profile case in South Africa, in which the leader of a body parts trafficking ring was convicted in the death of a 20-year-old woman.

“Too often, only middlemen and hired hands are arrested or prosecuted,” Ero said. “This sentence from the High Court of South Africa is particularly important as it condemns the man who organized and recruited persons for the crime.”