Home>News>Update: Madagascar issues warnings as strengthening storm Enawo approaches
By AT editor - 7 March 2017 at 6:00 am 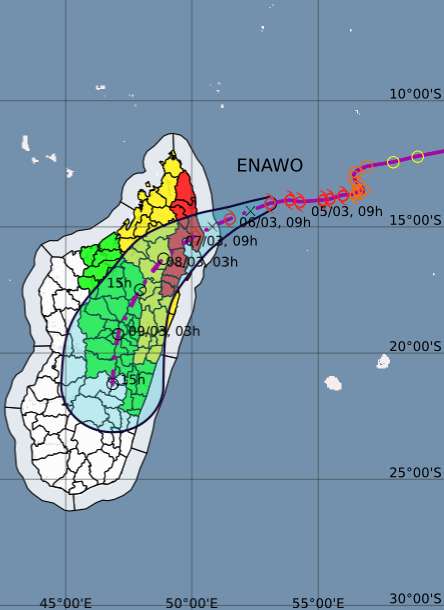 Tropical cyclone Enawo continues to track westward towards Madagascar, where meteorologists expect a landfall on Tuesday.

Meteo Madagascar placed a red alert for the storm, asking local authorities and citizens to make preparations. That warning extends for the communities along the northeast shore, including Antalaha and Sambava. A yellow alert remains in place for regions to the northwest and southeast of the island.

The agency placed Enawo 300 kilometers northeast of Antalaha, at 7 a.m. local time. Although subject to changes in timing and precise location, the current models forecast a daytime landfall on Tuesday.

According to Meteo France La Réunion, the cyclone at 4:10 a.m. Tuesday was located 800 kilometers to the northwest of Reunion and moving to the west-southwest at 17 kilometers per hour. Conditions remain favorable, although some fluctuations were noted with a suspected eyewall replacement cycle, and Enawo remains forecast to hit Madagascar as an intense tropical cyclone.

“Enawo has become a very dangerous cyclone and represents a significant threat to Madagascar’s northeast,” the agency said in its updated statement. The Antongil Bay area is particularly at risk of storm surge.

During their most recent 12-hour advisory, The Joint Typhoon Warning Center (JTWC) said the cyclone continued to move slowly west at 7 knots, or about 13 kilometers per hour. The well-organized storm approached Madagascar over warm waters of 29-30C, and wind and atmospheric conditions support continued intensification with estimated peak winds of 231 kph at landfall.

In addition to winds, rain and flooding are significant hazards.

The storm is expected to curve southward along the eastern island coast before weakening.