Home>News>Madagascar: Slow storm Enawo tracks south with heavy rains
By AT editor - 8 March 2017 at 7:10 am 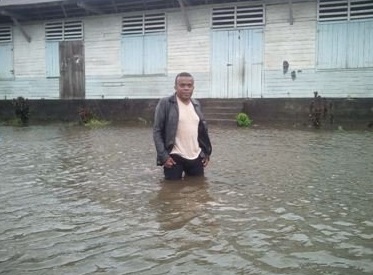 Powerful tropical cyclone Enawo, which made landfall near Antalaha Tuesday as an intense and destructive storm, continued Wednesday to affect the island nation of Madagascar.

At 7 a.m. local time, the slow-moving storm – which is tracking farther inland than originally forecast – continued to make its way south in its weakened state. However, Meteo Madagascar maintained red alert warnings for the northern part of the country, with yellow alerts for the central region and some parts of the west.

While the winds are reduced, the heavy rain and risk of flooding continued.

“The northeast of the country had already suffered two days of heavy rains before the cyclone made landfall, forcing the evacuation of some communities,” the Malagasy Red Cross said in a statement.

The cyclone’s arrival with wind speeds well in excess of 200 kilometers per hour delivered a blow to the northeastern coastal region at Maroantsetra on Tuesday. At least three deaths were reported, including two children, with buildings damaged and hundreds displaced, local officials said.

To the south, in the capital of Antananarivo, heavy rains with moderate winds were reported Wednesday. The storm closed schools, embassies and businesses as people sought shelter.

Enawo was believed to be the most powerful storm in 13 years to hit Madagascar, a poor nation of some 25 million residents. They struggled with drought conditions in 2016 and face continued food shortages in a country considered among the 10 most vulnerable on earth to cyclones, floods and other natural disasters that cause food insecurity.