Home>News>Egyptian antiquities discovery in Cairo mud is a once-in-a-lifetime find
By AT editor - 11 March 2017 at 5:23 am 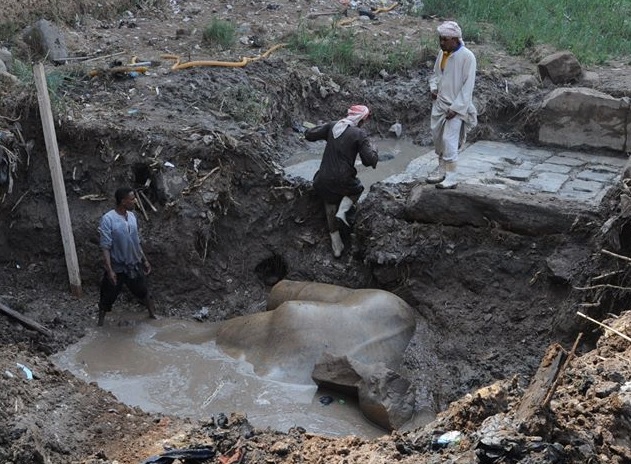 It probably will not happen again in this life, says German Egyptologist Dietrich Raue.

That’s what Raue told the Munich-based Süddeutsche Zeitung newspaper after he and Egyptian archaeological partner Ayman ​​Ashmawy discovered a colossal statue more than three millennia old at an ancient temple site of Heliopolis. The stunning discovery – described by Egyptian antiquities authorities as among their most important finds ever – has since made headlines all over the world.

The head and torso of a quartzite statue eight meters high are believed to be those of Ramses II, although they have yet to be formally identified. The location near the Ramses II temple site, an area of about 1100 by 900 meters, makes it probable.

In media interviews, Ashmawy has praised the craftsmanship of the find, and said it was comparable to the famous statues at Karnak or Luxor. Yet its location in the Matariya (Ayn Shams) district of Cairo is nothing like Luxor, which is preserved by the Egyptian government.

Rather, the poor urban community is built atop the ancient “city of the sun,” and Ashmawy and other archaeologists are discovering the antiquities under difficult conditions that make the find all the more priceless. Just one obelisk from the original Heliopolis has stood the uninterrupted test of time in Matariya.

New construction obscures the history, as does a rapidly rising water table; that’s one of the reasons the statue was found in muddy clay and water that had already risen 1.3 meters between 2005 and 2015.

The American Research Center in Egypt, which has helped to fund some of Ashmawy and Raue’s work, also said that in recent years more than eight meters of rubble, domestic trash and industrial waste were dumped above Heliopolis.

“These factors combine to make Heliopolis a most challenging environment for salvage archaeology,” the organization said.

Work at the site is expected to continue Monday, as the archaeologists plan to retrieve more of the statue.