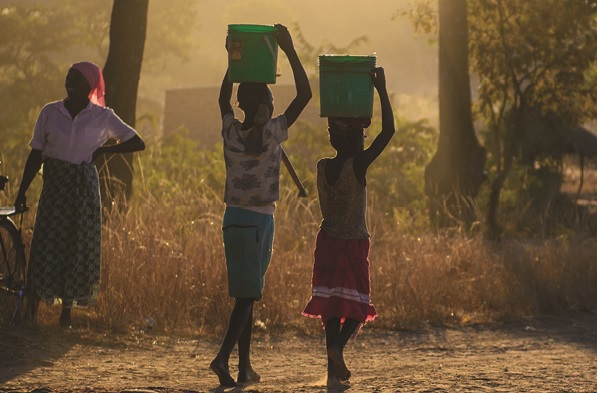 The meeting served as launch for the 2017 World Water Development Report, with its emphasis on waste water resources and their recapture. Zuma’s remarks on the report described a “bleak global picture” that demands a renewed call to action in order to navigate climate challenges and meet sustainable development goals (SDG).

Zuma recited a few key statistics – that just seven countries have met the both their drinking water and sanitation targets, that up to 3.1 billion additional residents in 2050 will live in urban areas, many of them in Africa. The numbers are indeed sobering in the face of climate change and challenge. Yet Zuma articulated real clarity on how protecting water resources is about people, not data and meetings.

“These statistics do not do justice in conveying the development and health challenges faced by so many people,” Zuma stressed, “or in contextualizing how unevenly these basic services are distributed around the world and within societies.”

Thousands have lived without love, he noted, citing the poet W.H. Auden. Not one without water. Yet the latter is a catastrophic reality for many in drought-stricken Somalia, in and around the increasingly fragile Lake Chad, in Mozambique and across parts of South Africa itself, where cities like Cape Town are warily eyeing their dwindling reserves and temperatures soared above 38C in the region Wednesday.

With just 103 days’ worth of water reserves held in the dam system, Cape Town authorities have said that the city needs to rethink how it uses water for the long term, not just to meet the immediate crisis.

“We are in the midst of one of our worst droughts of the past century,” says Xanthea Limberg, a member of the mayoral committee on water. “Cape Town is in a water-scarce region and is experiencing the impacts of climate change with an increased frequency of drought events.”

Changing the way the world views water was the topic in Durban too, as Patrick Verkooijen of the World Bank appealed for a transformation in managing the world’s resources. That was the motivation for the summit, which brought together a high-level panel with 11 heads of state to share insight and strategies on waste water.

The newly released report, with a foreword from UNESCO Director General Irina Bokova, warns of increasing water pollution in Africa’s rivers, where most waste water – up to 95 percent in developing countries – is discharged into the environment without treatment.

While about half of the municipal and industrial waste water is treated in North Africa, 32 of 48 sub-Saharan nations have no data at all. Meanwhile, extractive industries and agriculture create both competing demand for scarce water resources and soaring amounts of waste water.

This has tragic implications for human health, as the World Health Organization estimates that 115 people in Africa die every single hour from diseases that are linked to poor sanitation and hygiene practices, and contaminated water.

This, WHO says, causes more deaths among children than malaria, HIV/AIDS and measles combined, and in just eight years from now, half of the world’s population will be living in water-stressed areas.

As the Water Africa organization working with Zambia notes, there are long rural walks to collect water. They’re usually made by women and children, impact the time they have for work, study or play, and create safety risks. Yet for the 62 percent of urban sub-Saharan Africans who live in slums, the toxic health risks are right outside the door.

The good news is that there are smart solutions. In Accra, Ghana, untreated waste water from streams and drains is used to irrigate 15 kinds of crops that provide food for the population while reducing the pressure on freshwater sources needed for other citizen uses. Research estimates suggest a benefit to 200,000 people from all social classes, although there is some caution over microbial contamination.

In Botswana, treating waste water from Gaborone and making it available for irrigation of the Glen Valley farms is a solution to frequent droughts and chronic water scarcity. South Africa’s Eskom has for decades used reverse osmosis processes to recycle waste water used for cooling at its thermal power plants, while Namibia emerged as a leader nearly 50 years ago in treating waste water and returning it as clean drinking water to its population.

Public education and acceptance can be a challenge, as was demonstrated in Egypt when treated waste water was used in fish farming and for crop and tree irrigation. Despite the absence of toxins and careful monitoring for any pathogens, Egyptian consumers rejected the “dirty” products. Yet it’s a common practice in Tunisia, where effective policies and regulations govern resource recovery and agricultural irrigation using waste water is well established.

What summit participants – and all African leaders – hope to do is leverage the power of these known successes while capitalizing on new technologies that redefine waste water as a resource and solution. The technical advances will help to reclaim the value of waste water within the culture, particularly in rapidly growing urban centers, rather than viewing these resources as a disposal problem to be solved.

To learn more about the World Water Day Summit & Expo, see this link.