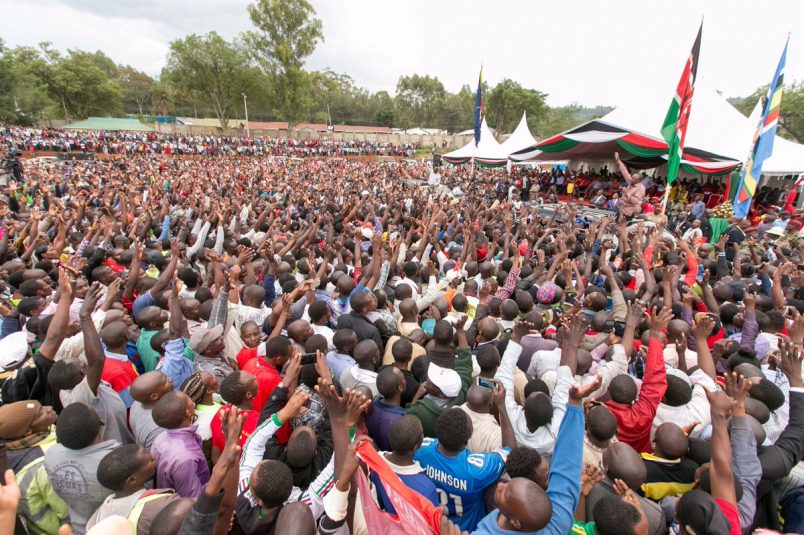 President Uhuru Kenyatta is pressing his re-election bid in Kenya, but not without disturbing controversy as he blamed the opposition on Wednesday for the electoral violence that scarred the nation a decade ago.

Kenyatta, campaigning in the Kisii region, appealed to voters to choose Jubilee in August and shun the negativity of Raila Odinga, the Orange Democratic Movement (ODM) leader who he blamed for the post-election violence in 2007 and 2008 that claimed more than 1,000 lives. It also displaced more than a half million people and resulted in an International Criminal Court (ICC) investigation.

“He was at the center of the violence. He is the one who ignited the flames,” Kenyatta said, speaking to leaders and voters gathered at Nyanturago Stadium. The president went on to say that Odinga knew exactly what was happening with the electoral violence but let William Ruto take the blame.

Ruto, Kenya’s deputy president, faced ICC charges of crimes against humanity relating to the political violence alongside Kenyatta until those charges were dropped, respectively, in 2016 and 2014.

Odinga pointedly acknowledged Kenyatta’s accusations over the violence, as well as the president’s claim that Odinga was responsible for the nation’s economic and cultural stagnation.

“We remind the president that the Gusii land he is visiting is littered with post-election violence victims who are yet to be compensated, including a widow who had only her husband’s skull to bury,” he said in a statement. “We hope the president has had time to ask whether she has been at his rallies and if she believes his story.”