Home>News>South Sudan denies claim that famine is a political crisis, aid is blocked
By AT editor - 25 March 2017 at 4:41 am 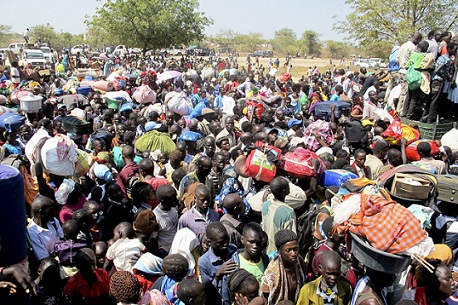 The South Sudanese government has denied that it is deliberately preventing humanitarian assistance from reaching civilians in conflict zones.

Martin Elia Lomuro, cabinet affairs minister for the famine- and conflict-stricken nation, refuted allegations made by the United States suggesting that the ongoing suffering of 100,000 people affected by famine – and a total of 5.5 million facing food insecurity – is at root a manmade crisis.

“There is no policy preventing humanitarian organizations from delivering assistances to where they are needed,” Lomuro told local media on Friday. “The government, through different institutions and authorities, has never stopped any humanitarian organization. Instead, the government has always demonstrated willingness to facilitate their movement to areas where their operations are needed.”

His defense of Juba stands in stark contrast to the remarks of Deputy U.S. Ambassador to the United Nations Michele Sison. “The famine is not a result of drought, it is the result of leaders more interested in political power and personal gain than in stopping violence and allowing humanitarian access,” Sison told the UN Security Council.

UN Secretary-General Antonio Guterres on Thursday added that “the government has yet to express any meaningful concern or take any tangible steps to address the plight of its people.” Guterres said South Sudanese leaders are failing to acknowledge the realities and continue to issue denials amid the crisis.