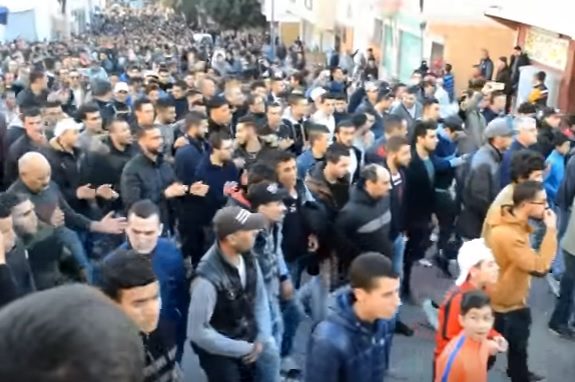 Moroccan authorities have arrested 14 people in connection with vandalism and arson attacks at an Imzouren police station in the troubled Al Hoceima province, the official Moroccan press agency said.

The youths attended a rally on Sunday before stoning the police building and burning four police cars, a public bus and a privately owned vehicle, Al Hoceima authorities said.

Just weeks ago, thousands of people marched in Al Hoceima demanding the release of people detained in previous incidents of vandalism, including a round of incidents sparked by a  March 3 football match. Sixteen people were arrested after clashes between team supporters that left buses and passenger cars damaged.

Al Hoceima has been on edge since last fall, when Mouhcine Fikri was crushed to death in a trash truck. Fikri was selling fish in a street market on October 28 when authorities took his goods and threw them into the truck; he died trying to retrieve them in an incident that attracted global attention.

Moroccan authorities charged 11 people with involuntary manslaughter and forgery of public documents in that case. The public was promised by then-prime minister Abdelilah Benkirane that the social and economic conditions that contributed to Fikri’s death would be a priority of his five-year administration. Yet Benkirane’s tenure ended abruptly earlier this month after Morocco’s failure to form a necessary coalition government led King Mohammed VI to replace him.

Fikri’s death continues to be a rallying point for protesters demanding social and economic reforms.

The Moroccan protests have been compared to the 2011 Arab Spring uprisings, and in part represent what anthropologist Miriyam Aouragh has described as “unfinished business” of Moroccan activists.