Home>African Future>Guinea Bissau: President boards Greenpeace ship to focus on illegal fishing
By AT editor - 29 March 2017 at 3:49 am 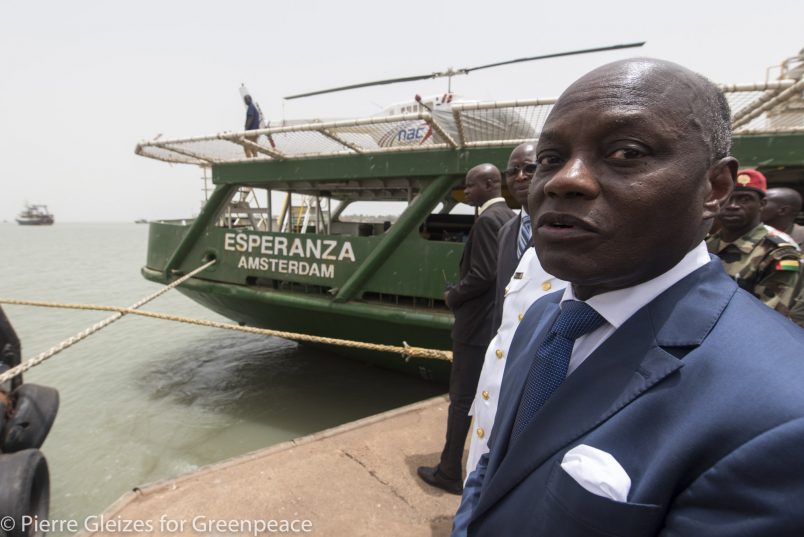 Guinea Bissau President José Mário Vaz stepped aboard the ship Esperanza on Tuesday to hear reports from his nation’s Fisheries Surveillance Department (FISCAP) on their joint illegal fishing patrols with the Greenpeace vessel.

Guinea Bissau authorities working with the international environmental organization told the president that just in the past week, they had discovered four Chinese vessels involved in various violations while conducting fishing operations.

They also investigated four Comoros-flagged vessels for transshipment at sea, a practice banned by the government of Guinea Bissau in 2015, and escorted two of the vessels to the Bissau port. The owners and crew now face legal charges, Greenpeace said in a statement.

“The fact that we managed to come across such a high number of vessels breaking the law in only a few days really confirms the alarming ‘Wild-West’ situation in the waters of West Africa,” said project leader Pavel Klinckhamers. “We commend the commitment from the highest level of the Bissau government to curb the ongoing situation.”

West Africa is the only region in the world where fish consumption is declining due to exploitation of resources by too many vessels and by illegal fishing operations, Greenpeace said. That’s becoming a critical problem for 7 million Africans who rely on the sea for food, income and employment.

From 2010 to 2016, six West African nations including Guinea Bissau lost an estimated USD$2.3 billion in revenues because of illegal, unregulated and unreported (IUU) fishing, the statement said. The highest number of offenses occurred in Guinea Bissau, but addressing the problem really requires a regional fisheries management body for improved oversight.