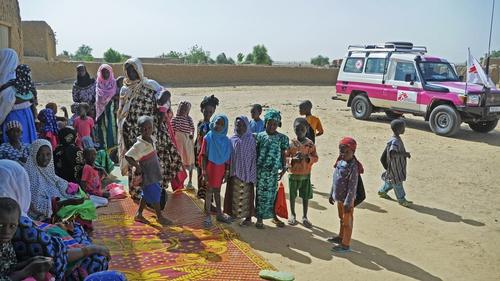 At a time when attacks on humanitarian aid workers and UN experts are painfully top of mind – as illustrated by recent events in Democratic Republic of Congo and South Sudan – a provocative new report from Médecins Sans Frontières (Doctors Without Borders) questions how the mission and safety of humanitarian aid workers is compromised by politicizing their presence in difficult conflict zones.

The “Perilous Terrain” report explores the problem in Mali, and to be clear, does not extrapolate the findings to other regions or continents. Yet the observations the NGO details from the Gao or Kidal regions may inform an understanding of on-the-ground complexities elsewhere – and MSF draws some parallels with practices the organization has used in other crises, including Darfur and Democratic Republic of Congo.

Mali is unique, the report argues, because of the overlapping and intersecting priorities of three military stabilization and counterterrorism missions there. They include the French Operation Barkhane, the United Nations Multidimensional Integrated Stabilization Mission in Mali (MINUSMA) and the European Union EUTM. The dynamics of that constellation are further complicated by relationships among the armed opposition.

What concerns MSF is that if humanitarian missions are conflated with the security and political goals of international agents, impartiality in providing aid is compromised. Foreign aid workers are put at risk when they appear to be a “part of the whole,” and an extension of a foreign military presence.

MSF also boldly questions the dilution of the humanitarian role and the problematic consequences. “The risk of associating humanitarian activities with intelligence-gathering is obvious,” the MSF authors warn. Yet it’s just one scenario in which generating mistrust and suspicion – especially in zones where people who cooperate with Western forces are targeted and killed – puts humanitarian workers in jeopardy.

More important, they say, any blurred identity for aid workers reduces the actual aid that is so often desperately needed. To protect that mission, and aid workers, the NGO needs to take steps that clarify their identity and delineate their role, even if that means painting the MSF vehicles a bright pink in the Gao town of Ansango.

To read the entire MSF report, see this link.