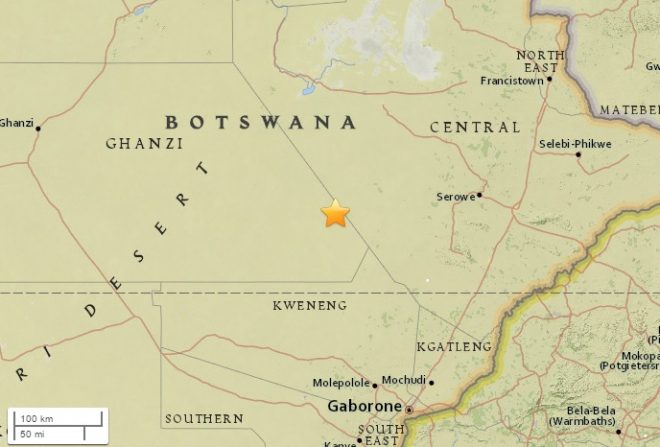 An aftershock earthquake that measured 5.0 magnitude on the Richter scale hit Botswana shortly before 3 a.m. Wednesday morning, according to the European Mediterranean Seismological Centre (EMSC).

The United States Geological Survey (USGS) also measured the quake at a 5.0 magnitude, with an epicenter in the same location as Monday night’s unexpectedly strong 6.5 magnitude quake near Moiyabana, in the rural east-central Ghanzi region of the country.

There were no immediate reports of injuries or damage.

Monday’s strong earthquake was widely felt across Botswana and South Africa, as well as in Lesotho, Mozambique, Namibia, Swaziland, Zambia and Zimbabwe, according to people who experienced the slow shaking of the shallow quake and logged their account with the USGS.

One Gabarone resident described a loud rumble that got louder and then ebbed away. “Something fell over in the garage, but otherwise no apparent damage,” they wrote on the EMSC testimonies log. “Very scary and everyone in the house panicked.”

Lights, doors and tables were shaking in Zimbabwe, while a Zambian resident described the experience there as scary too. Many southern Africans expressed concerns that another earthquake would indeed follow.

The Government of Botswana said Tuesday that there were reports of minor injuries and some structural damage in the large quake, which was the second-biggest on record. The largest quake recorded in the country was a 6.7 magnitude earthquake that hit Maun in 1952.

The National Disaster Management Office said at least 36 students from Mothamo Junior Secondary School in Moiyabana were affected by the incident, with injuries received during a stampede to escape their boarding school buildings. Two students were taken to hospital, while the others were treated at the school or the village clinic.

Ten households from the Moiyabana village suffered some structural defects. Damage also was reported in Jwaneng, where the Government Civic Centre building was cracked.

The Geosciences Institute in Botswana planned to make visual assessments of the damage.

The earthquake occurred in an area of low historic seismic activity. The USGS said that the earthquake was similar to those that occur in the East African rift system, a seismic zone that passes through eastern Africa from Djibouti and Eritrea on the north to Malawi and Mozambique on the south.

This was the third earthquake to hit southern Africa in less than 48 hours. An earlier 5.2-magnitude earthquake hit South Africa with an epicenter near Stilfontein, about 150 kilometers west of Johannesburg.