Home>News>Burundi: Cultural icon, traditional drummer Baranshakaje dies
By AT editor - 11 April 2017 at 2:44 am 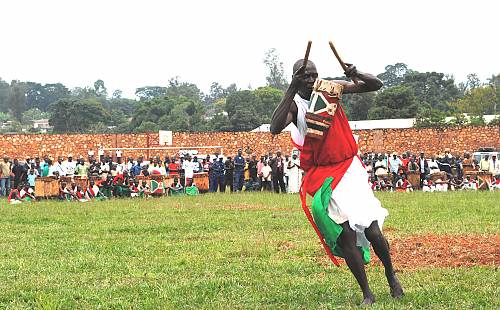 Burundi has lost a cultural icon, and announces the death of Antime Baranshakaje, the 81-year-old guardian of the nation’s sacred Gishora drum tradition.

President Pierre Nkurunziza hailed the drummer as a national treasure who left his mark on the history and culture of Burundi, and inspired generations to connect with the heritage expressed through traditional drumming. The president expressed his condolences to the family and nation in a statement.

Baranshakaje’s passion for preserving Burundi’s sacred drum heritage was acknowledged by UNESCO in 2014. The United Nations cultural and heritage arm extended Intangible Cultural Heritage status to the drumming tradition practiced at Gishora, about 100 kilometers east of the Bujumbura capital.

It was there that Baranshakaje – who had himself served as royal drummer to Burundi’s last king – maintained the Gishora Drum Sanctuary and its artifacts, including the sacred Ruciteme and Murimirwa drums. He also planted numerous umuvugangoma (Cordia Africana) trees used in making the drums.

Baranshakaje was devoted to teaching drumming, drum-making skills and the cultural traditions they reflected. They are used today to greet important guests, and played at national and local festivals.

“The ritual dance of the royal drum is a spectacle combining powerful, synchronized drumming with dancing, heroic poetry and traditional songs,” UNESCO explains. “The entire population of Burundi recognizes it as a fundamental part of its heritage and identity.”