Home>African Future>IOM: Libya is a 'torture archipelago' for migrants sold as slaves
By AT editor - 11 April 2017 at 6:05 pm 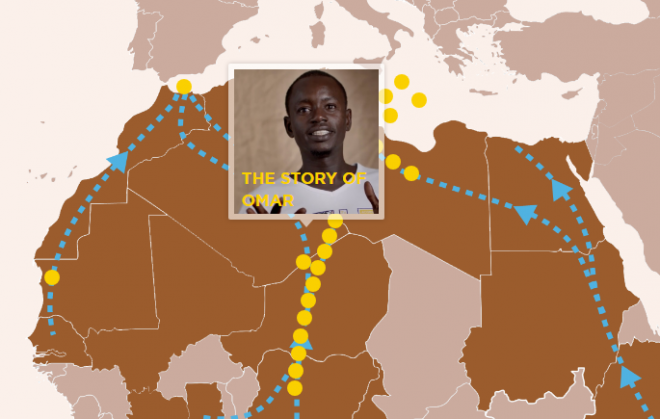 United Nations migration officials said Tuesday that migrants on the North African route hoping to cross the Mediterranean Sea are trafficked in what are essentially slave markets in lawless Libya.

“Migrants who go to Libya while trying to get to Europe, have no idea of the torture archipelago that awaits them just over the border,” said Leonard Doyle, chief IOM spokesman in Geneva. “There they become commodities to be bought, sold and discarded when they have no more value.”

The UN International Organization for Migration (IOM) said that staff workers in Libya and Niger have documented cases of African men being held captive for months, as was a man from Senegal. Although he safely navigated the Sahara – avoiding the fate of migrants who die in the desert – he was held up in Sabha, in western Libya, with demands for more money.

There, he and others were bought and sold in an open-air market set up in a parking area, a fate that also befalls women sold as sex slaves or into prostitution.

“Some migrants – mostly Nigerians, Ghanaians and Gambians – are forced to work for the kidnappers/slave traders as guards in the ransom houses or in the ‘market’ itself,” said an IOM staff member in Niger.

Officials describe a dire situation for migrants in Libya, where the slavery, starvation, sexual abuse and murder are common. The IOM officials now are hearing reports of mass graves in the desert.

An awareness campaign with short testimonial messages hopes to discourage those Africans who don’t know of the dangers they face. The Aware Migrants campaign uses social media outreach, along with broadcast media messages in African nations, to raise awareness about the human rights abuses.

To view the videos or learn more about the Aware Migrants program see the website.