Home>News>Zambia: Opposition party leaders uneasy as Hichilema heads to court
By AT editor - 12 April 2017 at 6:12 am 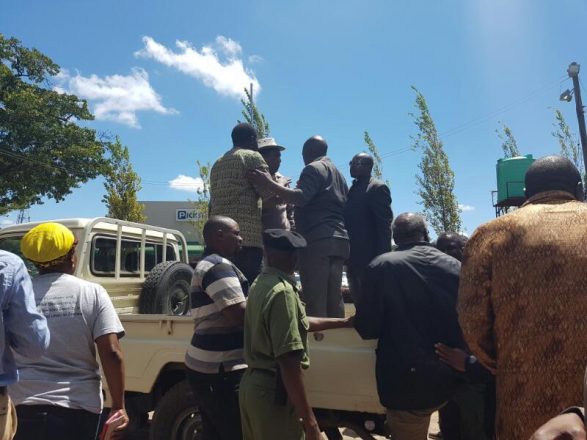 Zambian opposition leader Hakainde Hichilema is scheduled to appear in court Wednesday, where he is expected to face treason charges after being accused of blocking a presidential motorcade, according to legal counsel.

Hichilema, a prominent businessman and leader in the United Party for National Development (UPND), was arrested Monday night during a midnight ordeal at his home in the New Kusama area of Lusaka.

Local media reported that Hichilema and his family were inside when police surrounded the home, blocked any exit routes, cut off the power and fired tear gas inside. Hichilema, who lost to President Edgar Lungu in last year’s election, was taken into custody and remains detained at Lilayi Police Training College.

In a message to citizens posted on Hichilema’s Facebook page early Wednesday, the arrest is framed as a spiritual commitment on behalf of suffering Zambians with the resolve to meet their needs and endure on their behalf.

An affidavit released by Hichilema attorney Keith Mweemba showed his client’s request to be brought to court immediately because the detention and absence of charges were unconstitutional. The Lusaka High Court instead scheduled an appearance for April 12.

The news increased tensions among UPND members who have been warned not to publicly protest or rally by police. Hichilema’s arrest also comes as other opposition party leaders say they feel threatened and intimated, including Saviour Chishimba of the United Progressive People party.

“Is this why the (ruling Patriotic Front party) wants to withdraw us from the ICC?” asked Nevers Mumba, president of the Movement for Multiparty Democracy party, in an interview.

“We demand that this kind of targeted intimidation of the opposition must come to an end immediately. We also implore the international community to quickly check independently, the state of affairs we are quickly being plunged into as a country.”