Home>News>Somalia: Leaders agree to form new National Security Council
By AT editor - 18 April 2017 at 4:42 am 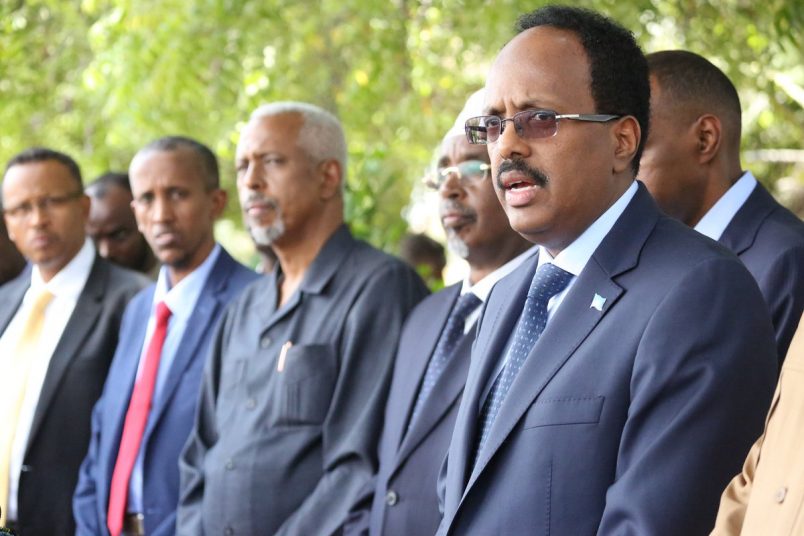 Government leaders in Somalia agreed to form a National Security Council during two days of meetings in Mogadishu that were completed on Monday.

President Mohamed Abdullahi Farmajo, who met for the first time since his February election with the heads of Somalia’s federal government alongside regional member states including Puntland and Jubbaland, will serve as chairman of the newly formed council.

The meeting participants also discussed the response to the drought crisis, economic development issues, and ways to strength relations between Somalia’s government and federal member states. In a joint communique issued at meeting’s end, however, they emphasized that decisions about the nation’s security were a priority in countering threats and continuing the fight against al-Shabaab.

The decision to create a security council was welcomed by Michael Keating, the United Nations envoy in Somalia and head of the UNSOM political mission.

“This agreement marks a major milestone for Somalia,” Keating said. “It is a cornerstone of the federal state building process and is a basis upon which strengthened security can be built.”

Keating made the statement on behalf of the UN, but noted a wide range of international agencies and countries shared their support for Somalia’s decision. They include the African Union Mission in Somalia (AMISOM), the Inter-Governmental Authority on Development (IGAD), the European Union (EU), Italy, Ethiopia, Sweden, Turkey, the United Kingdom, and the United States.

According to Radio Garowe media, in addition to Farmajo, the participants included the Speaker of the Parliament Mohammed Sheikh Osman Jawari and Prime Minister  Hassan Ali Khayre; the presidents of Puntland, Jubbaland and the Southwest, and the vice president of Galmudug.