Home>African Future>Togo: Renewed efforts to turn the tide on coastal erosion
By AT editor - 18 April 2017 at 7:38 am 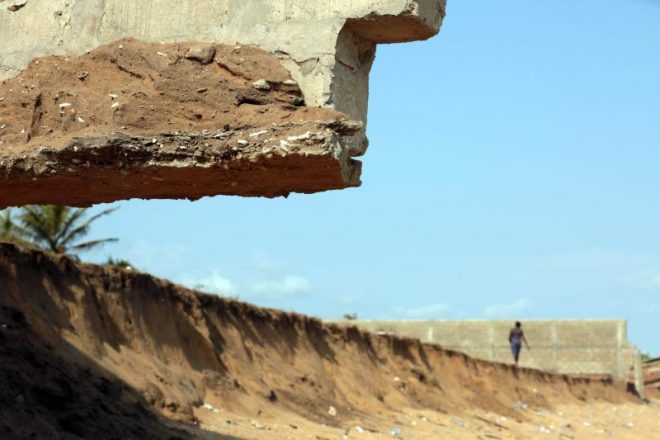 The West African nation of Togo has battled coastal erosion for decades, but now it’s with both a new sense of urgency and new strategic partners in the fight.

The wind and waves are destroying between five and 10 meters of shoreline every year, with some spots seeing 25 meters disappear, according to a Deutsche Welle report on Monday.

The country has a total of 50 kilometers of coastline on the Gulf of Guinea, an alarming 80 percent of which has been damaged – primarily because of port construction at Lome that disturbed the natural process for rebuilding the beaches, along with other manmade causes.

The damage is a threat to both Lome and Aneho, as well as other coastal communities. In Kpeme, about 30 kilometers from Lome, roads and houses are already gone. The threat has existed and been well-known for years; fishing villages like Gbetsogbe saw impacts more than 15 years ago, when Togolese authorities said the number of these villages already had been reduced from 64 to 22.

Aneho and other coastal cities will be gone by 2038, experts have said, if nothing is done.

The erosion constitutes a crisis for Togo and neighboring West African countries, where nearly a third of the population lives in the coastal regions that produce more than half of the GDP, according to the Nordic Development Fund.

The organization is a partner with other entities, including World Bank and the West African Economic and Monetary Union, that are working against the climate clock to protect the coastline.

A regional platform to access funding and technical expertise was launched last year. In 2015, World Bank committed USD$125 million to Togo, with additional funds for Ghana and Benin, all directed at coastal erosion.