Home>African Future>Air pollution and the impact on public health in Africa
By Laureen Fagan - 19 April 2017 at 9:11 pm 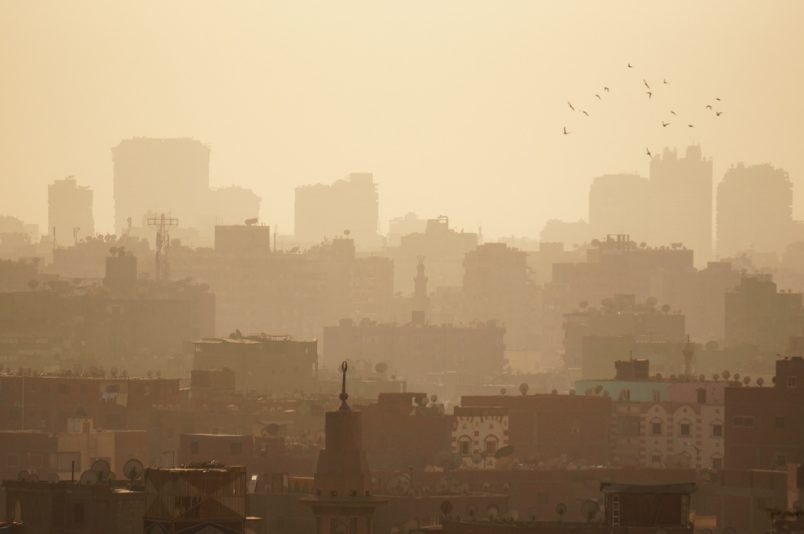 Air pollution has increased significantly in the last 25 years, and that’s having health consequences especially in low- and middle-income countries, according to a new Global Burden of Disease (GBD) study published in The Lancet medical journal.

Researchers found that air pollution – specifically, the small particles measured as less than PM2.5 in microns – was the fifth leading risk factor for death in 2015. It was exceeded only by high blood pressure, smoking, and the metabolic causes of high blood sugars and cholesterol often associated with diet and lifestyle.

One advantage of this study is that it compares the air pollution levels across 25 years, beginning in 1990, and finds an 11.2 percent increase in that time frame, with a more rapid acceleration between 2010 and 2015. All told, the particulate matter exposure accounted for 4.2 million deaths worldwide in 2015; an additional quarter of a million people died from diseases tied to ozone exposure.

The PM2.5 particles can enter human cells, causing serious respiratory issues and significant health problems, which is widely understood as an environmental risk in nations like China and India, populous countries that accounted for 52 percent of these air pollution related deaths. What’s noted less often is the degree to which African nations, with their growing urban populations and climate challenges, are confronted with air quality risks of particulate matter and ozone.

Some of the highest population-weighted concentration levels in the world were recorded in Egypt (104.7 µg/m³), Mauritania (85.1 µg/m³) and Libya (79.2 µg/m³). By comparison, India had mean concentration levels at 74.3 µg/m³ and China was at 58.4 µg/m³, although in the latter case the levels varied widely across the provinces.

Exposures in heavily polluted Nigeria, on the other hand, decreased significantly, and net increases in deaths linked to air pollution were seen everywhere except for among Nigerians and Americans.

West African countries generally had lower death rates in 2015, as did southern nations like Botswana and Zimbabwe, and eastern nations including Kenya. But those rates climbed higher in Sudan and Algeria, and remained higher through the central African nations as far south as Gabon, Congo-Brazzaville and Democratic Republic of Congo – stretching across the interior of the continent. 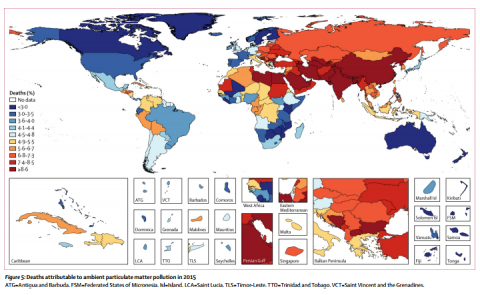 Historically, a key problem in understanding air quality and its influence on public health in African nations has been the absence of reliable data. The World Health Organization (WHO) is among other sources measuring and evaluating air pollution, particularly as urban centers are rapidly expanding. In a WHO database of 3,000 reporting stations released in 2016, there was just one reporting station in Uganda and in Madagascar, a few in Tunisia, and slightly better coverage in Nigeria or South Africa. Last year, WHO warned that even with limited data, the outdoor particulate matter seen was above median, with 80 percent of global urban dwellers exposed to unacceptable levels especially in low-income cities.

These and other studies have shown that long-term exposure to air pollution increases mortality and morbidity. A 2016 study found a higher risk of heart diseases related to elevated PM2.5 exposure and corresponding increases in calcium deposits in the coronary arteries. Another found a 22 percent increase in the risk for high blood pressure among people living with higher PM2.5 concentrations in the most polluted areas. The new GBD study notes that in the past 10 years, in addition to asthma and other respiratory illnesses, PM2.5 exposure is linked with Type II diabetes, and preterm and low-weight births, suggesting that as research evolves the public health implications of air pollution may expand further.

One thing the new GBD study emphasizes is that science still doesn’t know what, if any, variations exist in the health risks from different air pollution sources such as vehicle emissions or coal burning. For that reason, the authors conclude that air quality policies and initiatives need to include a range of sources.

Many of the causes of air pollution are tied to industry practices and infrastructure decisions beyond the choices of individuals or communities, often leading to questions of environmental justice as well as the policies and practical application of strategies meant to achieve it while limiting overall impacts on public health.

Africa’s commitment to global leadership on climate change, and its turn toward clean energy sources to meet exploding power demands, will curb the rise in death and disease from air pollution. Improving the policy frameworks on energy needs to be a priority; according to a new RISE (Regulatory Indicators for Sustainable Energy) report issued in February, some 40 percent of sub-Saharan countries lag in their policy development and regulatory environment on energy access, efficiency, and renewable sources.

Yet many Africans also are exposed to air pollution from their cooking sources, in agricultural practices or in their often artisanal extractive industries. While everything from wood stoves in Gaborone to e-waste recycling in Accra is understood as a climate or economic problem, or both, governments need to integrate their management practices and their citizens need to make the greater connection between associated toxic air and an evolving knowledge of its public health impacts.