Home>News>Ethiopia: Report on protest deaths blames Oromo opposition, media
By AT editor - 19 April 2017 at 5:08 am 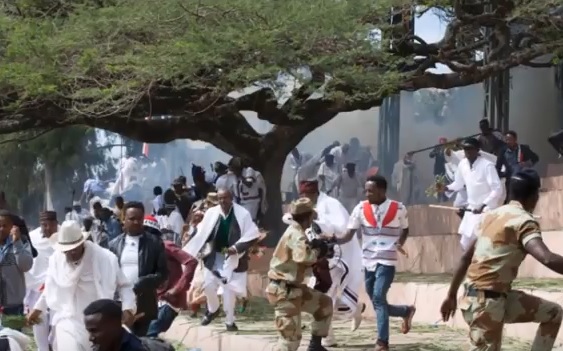 The Ethiopian Human Rights Commission (EHRC) said Tuesday that 669 people were killed in the waves of protests that began in 2015, the majority of them in the volatile Oromia region.

Dr. Addisu Gebregziabher, head of the EHRC, said the numbers were based on investigations of incidents in Oromia, as well as Amhara and the Southern Nations, Nationalities and People’s Region (SNNPR), the Addis Standard reports.

The report was released as Ethiopia’s Prime Minister Hailemariam Desalegn told the BBC that Ethiopia rejects calls from the European Union and the United Nations to conduct an independent inquiry. He said the EHRC was the only appropriate avenue for an investigations Ethiopia will conduct by itself.

The Ethiopian government blamed the Oromo Media Network (OMN), other diaspora sources, and opposition groups for fanning the flames of unrest and escalating the crisis, while defending all national security measures as appropriate.

That claim was rejected by OMN executive director Jawar Mohammed, who has been charged with terrorist activity alongside longtime Oromo leader Dr. Merera Gudina and Ethiopian opposition leader Berhanu Nega.

“We are proud of our role in exposing mass killing and we won’t be intimidated by such accusations,” said Mohammed in a posted response.

Human rights groups in Ethiopia and abroad have consistently said that the death toll is far higher than official sources report – particularly under the state of emergency imposed after the Irreecha festival incident in October.