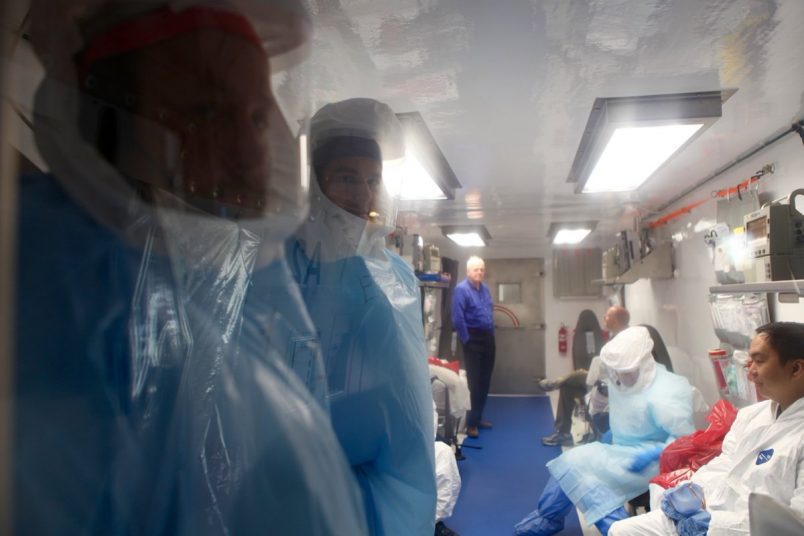 An international exercise for dealing with disease outbreaks held in Senegal last week was described Tuesday as “the largest overseas biocontainment exercise in history” by United States officials.

The “patients” were then flown to five different hospitals in the U.S. with specialized care facilities.

“This is not about Ebola,” said Dr. William Walters, the U.S. Department of State’s managing director for Operational Medicine, on the exercise.

“This is about the Middle East respiratory syndrome coronavirus, MERS-CoV, in Qatar, with outbreaks every month for the past several months; Lassa fever in Benin, Togo, and Burkina Faso from February of this year; plague in Madagascar in December of last year. Infectious disease outbreaks happen all the time.”

The exercise tested the ability to use new 40-foot containers that serve as mobile intensive care units, and can be loaded onto several different types of aircraft to perform evacuations of more than one person. This Containerized BioContainment System replaces the soft plastic tents that were used during the Ebola crisis.

The system has never been used apart from the drills, officials said during the press conference, and was designed for use in nonmilitary aircraft.

Walters stressed the importance of emergency response, whatever the agent and wherever that occurs.

“Whether there is an outbreak in Paducah (Kentucky) or in Pretoria, at the end of the day, there will be a requirement for safe and effective and efficient movement of patients to the appropriate care,” Walters said.