Home>Commentary>France's candidates: Le Pen, Macron and a divide that shapes the future
By Laureen Fagan - 24 April 2017 at 5:55 am 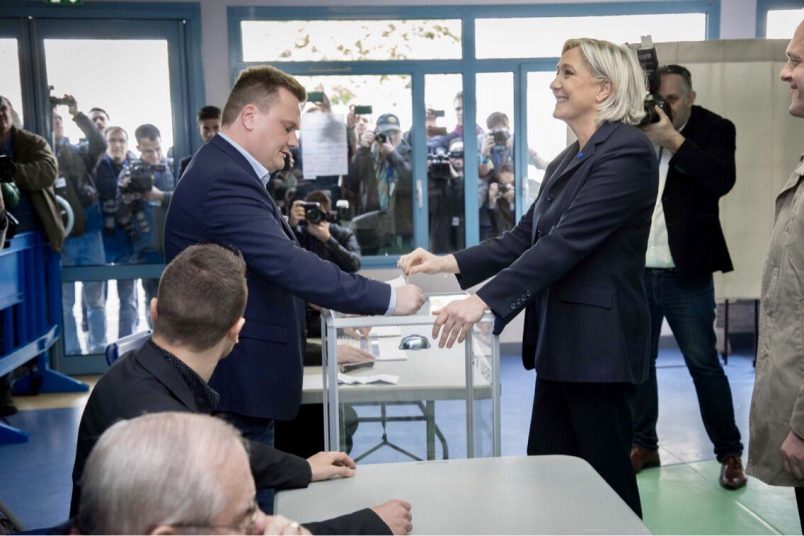 French presidential candidates Marine Le Pen and Emmanuel Macron will head to the second and final round of national elections on May 7, after comfortably defeating challengers in Sunday’s voting – but  with neither candidate establishing a clear majority, nor French voters finding a clear voice.

With 97 percent of the vote counted, the independent centrist Macron claimed 23.9 percent of the vote to Le Pen and the right-wing National Front party’s 21.4 percent. The two outpaced embattled Republican candidate François Fillon and the far-left Jean-Luc Mélenchon, along with a slate of minor party candidates, in a contest with dramatic implications for France’s role in Africa and across the globe.

That the traditionally powerful Republican and Socialist parties saw their candidates sidelined illustrates the political shift within France that has lifted the long-marginalized National Front into a legitimate force. Facile comparisons with the populism that put United States President Donald Trump into the White House, fueled the Brexit referendum in the United Kingdom or fenced off Hungary under Viktor Orbán fail to capture the complexity of France’s historic moment.

Despite key differences and underlying causes, Le Pen’s claim that the survival of France is at stake – its identity and independence – resonated with the electorate.

To be clear, Macron received more votes in the first round and according to numbers released Sunday, is likely to do so in May with ease. An Ipsos poll cited by Bloomberg projects Macron with 62 percent of the vote to Le Pen’s 38 percent in the coming election. Theoretically, at least, a potential Macron victory is made even more likely by the immediate endorsements from Fillon and the lagging Socialist Benoit Hamon, whose voters are likely to shy away from a Le Pen presidency.

Indeed, based on actual first-round votes cast and the results of an Ifop poll for the Le Pen-Macron scenario, the majority of Hamon and Mélenchon voters will choose Macron, as will 43 percent of Fillon’s. Former Socialist Mélenchon, for his part, refused to endorse either frontrunner and planned to have his supporters decide.

Yet the rise of Le Pen and National Front, especially when compared with the party’s popularity in the previous five-year cycles of French presidential and National Assembly elections, signals a shift along the continuum. Except for a few islands including Paris, Le Pen voters effectively split the country in two as they again prevailed in the security- and economy-driven north and east.

Compared with her 2012 first-round votes, Le Pen extended her advantage across France, did so by more than 5 percentage points in the region along the Belgian border, and boosted it in the southern tier the National Front has called home.

Her opponent Macron is a former economic minister under outgoing President François Hollande, whose decision not to run for re-election was a departure from France’s status quo in the first place.

Parisian voters widely supported Macron, as did those in western France who were historically loyal to Hollande’s leadership. The former Rothschild investment banker is endorsed by French elites, received an encouraging telephone call from former U.S. President Barack Obama, and was awash in first-round congratulations from European leaders including the European Commission’s Jean Claude Juncker.

Macron formed his new En Marche party in 2016, in the hopes of crafting a centrist platform that, in comparison with Le Pen, promotes social and economic reforms in France, and extends its participation in NATO, the United Nations – and above all the EU. Macron, keenly aware of the future challenges to France’s foreign policy in Africa, traveled to Algeria earlier this year.

He has called migration to Europe unstoppable, affirms the value of multiculturalism and specifically Muslims in French society, and sparked controversy with remarks about France’s colonial history that described them as crimes against humanity. At the same time, he remains committed to France’s security and counterterrorism role in Francophone nations, and during a presidential debate earlier this month promised to hire 10,000 police officers to protect France’s own territory and borders.

What would relationships with France under Le Pen look like? Most analysts have spent more time looking at the question because of National Front’s extremist history and the hard-right positions that Le Pen takes. Le Pen has seen success with the promise of a nationalism that will end what her supporters see as the lack of autonomy and economic harm of globalization. She has campaigned on France’s departure from the EU, promoted its sovereignty and identity, and is virulent in her opposition to Islamic influences in France’s society and culture.

Le Pen promises an end to terrorism in the streets of Paris or Nice, and vows to ensure that migration is carefully controlled – and to that end, has made Africa the top international priority of the National Front platform. Her vision, however, relies on significant investments in development partnerships, particularly in agriculture and education, in ways similar to the EU’s own approach at deterring migrants.

While the possibility of a Le Pen presidency is widely discounted, it can’t be ruled out entirely just yet. What is certain, though, is that France has changed – perhaps forever –  no matter who wins. That means France’s relationships with former colonies, other African countries and the rest of the world will too.