Home>Finance & Economics>AfDB's Adesina latest to warn against Trump's deep aid cuts targeting Africa
By AT editor - 25 April 2017 at 5:07 am 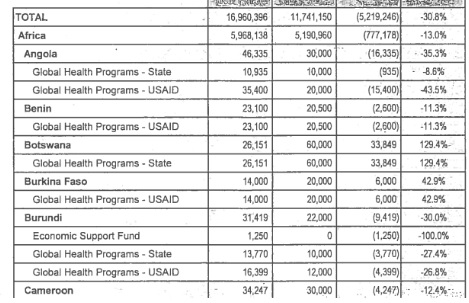 Akinwumi Adesina, president of the African Development Bank, says Africa faces a triangle of disaster because of youth unemployment, poverty, and environmental and climate impacts.

“Everywhere you find this triangle of disaster you always find terrorists,” Adesina said in a Financial Times interview published Monday. The article focused on how migration across the Mediterranean and extremism at home are fueled by economic impacts that may only deepen if United States President Donald Trump pushes through a proposed budget that cuts foreign aid and development bank funding.

Under Trump’s plan, the USAID program and its footprint in about 100 countries would see two-thirds of its regional bureaus cut with dozens of field missions eliminated. The U.S. State Department anticipates 25 percent cuts in global health funding. Development programs meant to prevent food shortages under the Bureau of Food Security may be curtailed if the proposed cut of 68 percent is enacted, according to a Foreign Policy report that includes a leaked 15-page analysis of 2018 proposals by nation and foreign aid sector.

The overall 30.8 percent reduction includes deep cuts in many African nations, with funding for some programs – development assistance in Mali and Niger, global health programs from Lesotho to Liberia – eliminated entirely. There are also reports that the State Department and USAID will be merged into a single entity.

Adesina isn’t the only one to warn of the security and humanitarian consequences that may follow Trump administration cuts to foreign aid. Philanthropist Bill Gates and his foundation have criticized the cuts, and Gates met with Trump at the White House in March to press the president for changes.