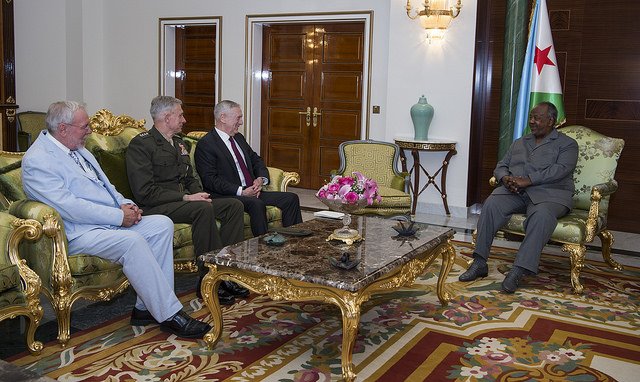 Drought and famine are contributing to an uptick in piracy off the Horn of Africa, according to remarks made by the American general in command of Africa during a weekend visit to Djibouti.

“There have in the last month been four or five, maybe six piracy attacks here in the region,” said General Thomas Waldhauser of U.S. AFRICOM during a press briefing.

“Some of the reasons we see for that have to do with the drought and the famine, because some of the vessels that have been taken under hijacking have had some food and some oil on them.  Moreover, these particular ships have been very small in stature and really a lucrative target for pirates.”

Waldhauser was joined by U.S. Secretary of Defense Jim Mattis during his tour of Camp Lemonnier in Djibouti. Mattis met with President Ismail Omar Guelleh to discuss security and counterterrorism efforts, as well as the partnership between nations that facilitates the long-term U.S. military presence.

The defense secretary stressed the multinational commitment to security in the region, noting that the Japanese have their only overseas military base in Djibouti, and that he was meeting with French troops who are stationed there. An officer from Djibouti currently heads the AMISOM mission in Somalia, and the country has two battalions serving with AMISOM.

During his remarks, Waldhauser said the U.S. continues to support counterterrorism efforts in Libya but there has been no appeal for troops there. The expanded American presence in Somalia is focused on developing intelligence and strategic targets, he said.