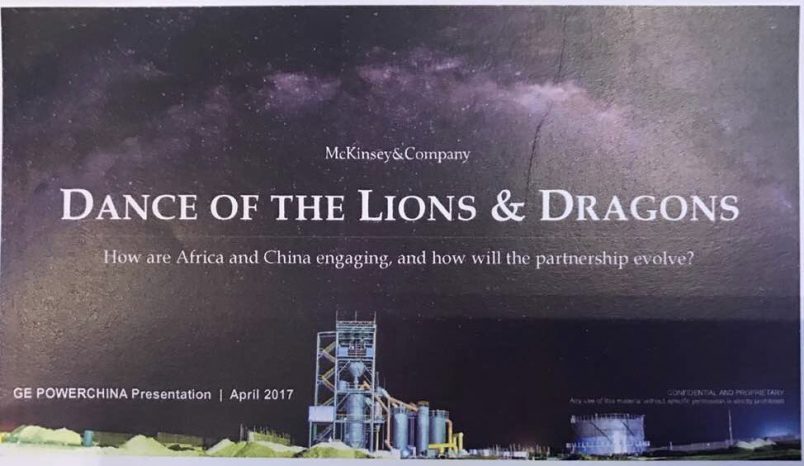 The preview of a McKinsey & Company report on Chinese investment in Africa is making a few headlines, but full details on “Dance of the Lions and Dragons” won’t be released until the upcoming World Economic Forum (WEF) in Asia.

What McKinsey did share at a WEF event in Durban, South Africa, last week, upended some of the stereotypes about Chinese investment on the continent, according to Business Day.

The study “provides a counter to widespread notions that China’s push into Africa reflects a ‘new form of colonialism’ — as The New York Times called it in an article last week — driven by the Chinese state, using Chinese workers and focusing on extracting resources and flooding Africa with cheap imports,” the South African news outlet said.

While the report itself is not yet online, some of the visual elements from last week’s presentation on “Dance of the Lions and Dragons” have been widely shared on social media. They include brief details about the research conducted with more than 1,000 Chinese firms with operations in Africa, and more than 100 African leaders.

What McKinsey found is that China is now Africa’s largest economic partner, on measures that include fastest-growing source of FDI, largest trade partner and largest financer of infrastructure projects. China now ranks No. 3 as a donor, and represents a $440 billion Africa-China opportunity by 2025.

By the numbers, researchers also found that 85 percent of China’s business activity in Africa arises from privately held companies, and contrary to many perceptions, 86 percent of the workforce is local.

The World Economic Forum on ASEAN 2017 begins Wednesday in Cambodia. The science and technology-focused “Annual Meeting of the New Champions 2017” will be held in China in June.