Home>ENERGY & COMMODITIES>Ghana's military denies reports of its involvement in illegal mining
By AT editor - 10 May 2017 at 4:04 am 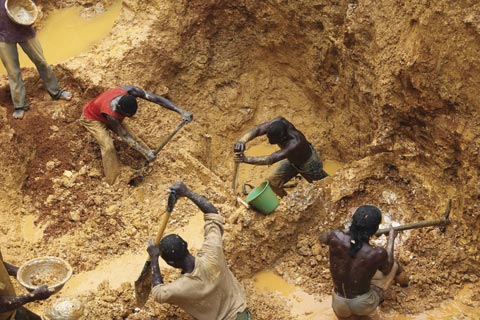 The Ghana Armed Forces, in response to recent media reports, denies that its soldiers are involved in the country’s illegal mining operations or providing security and assistance to those who are.

In a statement issued Tuesday, GAF spokesman Col. Eric Aggrey-Quarshie challenged information that surfaced last week during a panel discussion aired on Accra-based radio station Joy FM. The program focused on a confidential Bureau of National Investigation report that the news outlet claimed it has seen.

It allegedly lists high-level politicians in both main political parties, corporate mining entities, and community elders in connection with illegal artisanal mining, known as ‘galamsey’ in the region.

During the on-air discussion, participants added the GAF to that list, after they were allegedly seen at illegal mining operations at Banda Nkwanta in the west-central part of the country.

“GAF wishes to express its utter dismay at the judgment and conclusions drawn by panelists on the morning show as well as subsequent news reports, without seeking the position of GAF on the matter before going ahead to discredit the military in its entirety,” the GAF statement said. It went on to defend the role of the Ghanaian military in providing security for legitimate mining companies, and participating in Operation HALT and related efforts to curb illegal mining.

Examples include protection at the Canada-Ghana Mining Company property and Anglogold Ashanti, Aggrey-Quarshie said. He noted that in the case of three former soldiers found complicit in an illegal mining operation in Wassa Akropong in March, they were turned over immediately to civil authorities.

The dispute comes at a time of heightened awareness over illegal mining impacts in the West African nation, and a current ultimatum for operators to cease mining and remove their equipment.

The recent arrest of five Chinese nationals suspected of galamsey operations is the latest in Ghana’s years-long struggle to gain control over foreign influence in illegal mining, as well as its prevalence among Ghanaians.